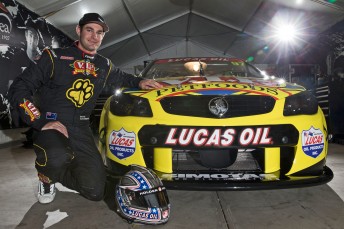 The partnership was announced in the TEKNO Autosports garage at Pukekohe Park Raceway, near Auckland, New Zealand, this morning, ahead of the weekend’s ITM 500 – the fourth round of the 2014 V8 Supercars Championship.The announcement officially introduces Lucas Oil Products to V8 Supercars and will see significant Lucas Oil branding on TEKNO’s race-winning V.I.P. Petfoods VF Commodore driven by the talented Shane van Gisbergen.In addition to on-car positioning, the famous Lucas Oil Products logo will also be seen in the team’s pit facilities, on Van Gisbergen’s driving suit and helmet, and on the team transporter.While Lucas Oils is new to V8 Supercars sponsorship, it already has a successful history in the category with TEKNO and Van Gisbergen having used its lubricants to win two of the series’ biggest events in 2013 – the Clipsal 500 and Sydney 500.TEKNO Autosports will continue to use Lucas Oil Products in its Holden V8 Supercar and also enjoy expanded technical support, while team owner Jonathon Webb’s growing TEKNO Performance road car business will also exclusively use and recommend the extensive range of Lucas lubricants and additives.“We are excited to announce Lucas Oil Products’ official arrival in V8 Supercars with TEKNO Autosports, and pleased to welcome TEKNO into the Lucas Oil family,” Lucas Oil Products founder and CEO, Forrest Lucas said.“V8 Supercars is Australia and New Zealand’s biggest motor racing series – it is fast and exciting, and produces some of the closest and most dynamic racing there is.“Our decision to officially enter V8s reflects our ambitions for the Australian and New Zealand lubricant and additive markets while our partnership with TEKNO recognises its commitment to winning, the success it has already had using Lucas Oil Products, and loyalty to our brand.”Tom Bogner, Lucas Oil’s Director of Motorsport, said the company was excited about making its official V8 Supercars debut and that Lucas Oil would play an active role in TEKNO’s on-track performance.“Lucas Oil takes pride in not just being a name on the side of a race car, but in having our lubricants in the car and developing them to achieve wins,” Bogner said.“We are all looking forward to the partnership with TEKNO and V8 Supercars – it’s an exciting, competitive form of auto racing and we will be working closely with TEKNO to help them achieve the desired results.“We wish Shane and the team the greatest of success this weekend, and I look forward to seeing them in action first hand when I attend the Townsville 500 in July.”TEKNO Autosports General Manager, Steve Hallam said the team was proud to introduce a new, and instantly recognisable international brand into V8 Supercars.“Lucas Oil Products is an extremely active marketer through motorsport in the United States and to be able to introduce the brand into V8 Supercars is a proud moment for TEKNO,” Hallam said.“The company uses motorsport to not only promote its products, but also for research and development to improve its lubricants and additives. That benefits teams like TEKNO when searching for an edge in performance, and consumers to whom those developments ultimately filter down to.“We are delighted to have such a valuable partner and look forward to working with Lucas Oil Products over the coming years.”Van Gisbergen said he was looking forward to working with a company as passionate about motor racing as he is.“Anyone who watches any form of racing from the USA, be it NASCAR, Indycar, Drag Racing or Sprintcars will be familiar with the Lucas Oil brand – the Lucas Oil logo is everywhere,” Van Gisbergen said.“V8s is so competitive, everyone’s looking for ‘that’ edge, any tiny performance gain.“It’s a compliment that Lucas Oil have chosen TEKNO to become involved in V8 Supercars with. They’re fanatical about racing and winning, and Lucas Oil just could well be the advantage.”