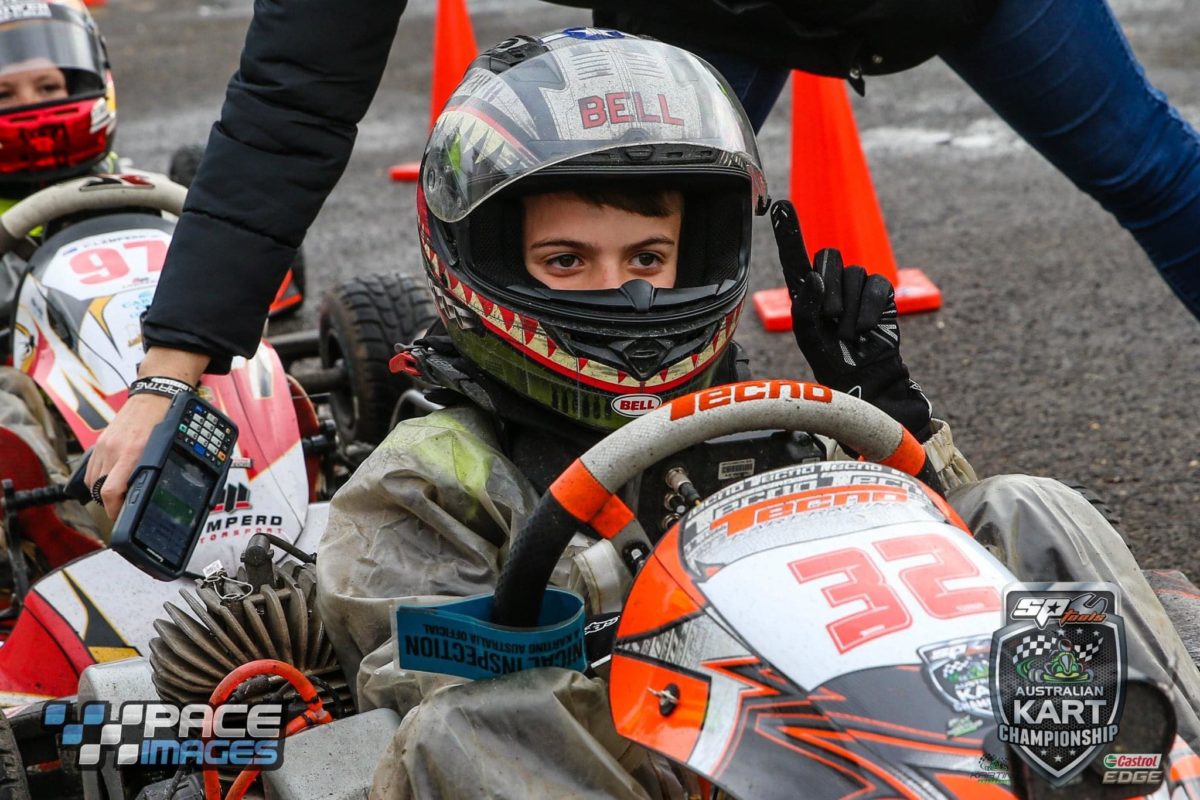 Tecno Karts Australia returned to the track over the weekend at round three of the SP Tools Australian Kart Championship out of the Eastern Lions Kart Club. With a team of thirteen drivers running across five classes, Tecno Karts Australia was looking to continue its resurgence to the top of Karting Australia. With a wet and wild weekend of racing to be had, the team were looking for strong results.

Cadet 9 had the biggest flavour of Tecno Karts with Cruz Kelly, Jensen Damaschino, Nick Kinder and Blake Haigh all representing the team. Kelly led the way in qualifying setting a pole position lap time, with Damaschino in position five and Haigh and Kinder in position eight and twenty one respectively. Kelly was the star of the heats taking all four heat victories, with Damaschino running inside the top ten in all heats and as high as second in heat two. Haigh and Kinder battled on the edge of the top ten and fifteen in all the heats looking to improve across the weekend. The final was an exciting affair with both Kelly and Damaschino having shots at leading the race and taking the round win. Damaschino was able to take victory and his maiden SP Tools Australian Kart Championship round victory, with Kelly joining him on the podium in third place. Kinder and Haigh rounded out their weekend coming home in position fifteen and seventeen overall in the final.

Riley Jabke was the sole driver in TAG 125 for Tecno Karts Australia team in a near full field of forty driver. Jabke put in a superb lap in qualifying landing just outside the top ten in position twelve overall. Riley had an unfortunate DNF in heat one which put him down the order for the remainder of the heats. Jabke fought back to position twenty one in heat three and then put in a massive drive to position ten in heat four. Riley was looking on for a great result for but an incident resulted in him having a DNF and bringing his charge to an end.

X30 had a triple driver attack for Tecno Karts Australia with Marcus Pisani, Cohen Day and Harrison Draffin on circuit. Pisani led the charge in qualifiying setting the ninth fastest time with Day in position twenty and Draffin in position thirty four. All three drivers had improving pace but two DNF’s for Pisani and one each for Day and Draffin hurt their chances and had them starting down the order. Pisani regrouped and starting near the rear of the field was able to work his way up just outside the top twenty in position twenty two overall. After showing improving pace Day and Draffin both unfortunately didn’t finish the final and they’ll be looking to bounce back at the next round of the championship!

Rayner Costello and Elijah Brown took on the KA3 Senior class with nearly fifty drivers in the field. Costello led the way putting himself in position twenty overall in qualifying, with Brown down just outside the top forty looking to move forward in the heats. Costello did a brilliant job finish all of his heats having two eleventh placings and a ninth to close his heats. Brown also moved forward across his heats making his way into the top twenty with a position seventeen and sixteen overall. Costello put in a brilliant performance in the final to come home inside the top ten in position eight overall! Brown after charging forward across the weekend had an unfortunate DNF to end his charge in the final.

Tecno Karts Australia team owner Lincoln Day spoke post weekend of the team’s first SP Tools Australian Kart Championship win of the 2022 season. “It’s been an emotional weekend for the team! The outstanding driving from everyone in the tent and the podium win for the cadet 9’s has made us so proud to have pushed through and continue to import a product of amazing quality. We are so proud of everyone who is joining forces with us to show Australia just how great Tecno is.We are back on the map”! Tecno Karts Australia will be back at the track this weekend in Mildura at their North West Kart Titles over the June Long Weekend.