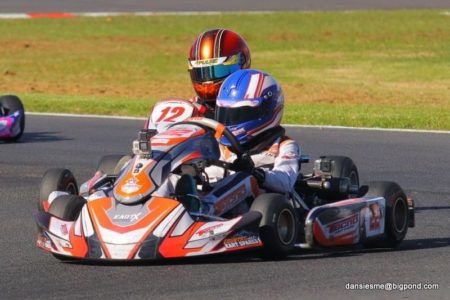 Tecno Karts Victoria – Country Kart Spares took a team of seven drivers to third round of the Victorian Golden Power Series over the weekend. Racing was taking place at the Albury Wodonga Kart Club with the team looking to continue Tecno Karts Auatralia development and good results. With the seven drivers racing across four classes, the team were in for a bumper weekend of racing!
Hugo Garraway, Jackson Pinczuk and Levi Fisher were all representing the Tecno Karts Victoria – Country Kart Spares team in the KA4 Junior Heavy division. Garraway led the charge in qualifying landing himself in the top three in third spot! Pinczuk put himself inside the top ten in position eight, with Fisher just outside the top ten in position twelve. Garraway continued to lead the way in the heats never leaving the top four and looking a strong podium chance. Pinczuk and Fisher both raced hard and moved into the top ten at stages throughout the heats with Jackson coming home as high as sixth and Levi as high as ninth. Garraway put in an excellent drive in the final to come away with third spot and on the podium for the team. Pinczuk was able to fight hard and come home inside the top ten with ninth position overall. Fisher raced hard in the final with an improved effort from the opening few rounds, coming home in position eleven overall!
Dino Maio was the sole Tecno Karts Victoria – Country Kart Spares driver in a near thirty kart field of Cadet 12. Maio fought hard in qualifying improving from his practice times and coming home just outside the top fifteen in position sixteen overall. Dino raced consistently across his heats coming home in position fourteen in heat one. Sixteen in heat two and fifteen in the third heat. Maio was looking to come forward in the final and with good pace and excellent driving the young driver was able to do just that. Dino came away with his best result of the weekend, just outside the top ten in position eleven overall!
Tecno Karts Victoria – Country Kart Spares had the one senior driver in KA3 Senior Light in Shannon Fisher. Fisher was up against an intense field of drivers setting a time just inside the top twenty in qualifying in nineteenth position. Shannon had a mixed opening few heats with an eighteenth position in heat one and a DNF result in heat two. Fisher put in her best drive of the weekend in heat three moving up to position sixteen overall in an improved performance in lap time. Shannon’s weekend unfortunately came to a tough end with a DNF in the final ending her charge forward.
Jensen Damaschino was the youngest driver of the Tecno Karts Victoria – Country Kart Spares team in Cadet 12. Damaschino put in a solid lap time to get himself inside the top four in fourth position for qualifying. Jensen came home with fourth place in the heats but put in an amazing driver to come through to take second in heat two and a win in the third heat having himself right in contention for the final. In a tough and heart wrenching final, Damaschino battled in the lead group and was able to come home on the podium in third spot overall!
Team manager Shane Moore spoke post weekend on the continual progression of his drivers and team. “For a small and new team, I’m so proud of all of our Tecno drivers. As a team we will continue to grow and get stronger”. Tecno will be back making a big impact at the Australian Kart Championship this weekend at the Eastern Lions Kart Club.