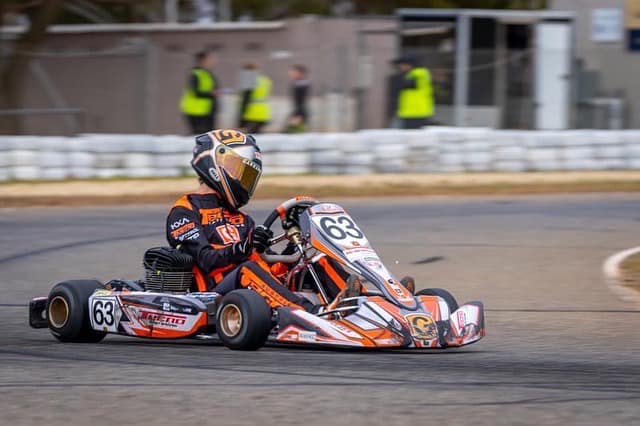 Tecno Karts Australia took a team of five drivers across four classes to the North West Kart Titles over the June long weekend at the Mildura Kart Club. Tecno Australia were hot off their best weekend of season 2022, coming away with an SP Tools Australian Kart Championship round win in Cadet 9! The team were now chasing more victories and more podium results in their hunt to return to the top of the karting mountain.

Cohen Day was the senior driver of the team taking on the TAG 125 Light category. Day did a superb job to put himself in the front pack for qualifying and heat one. Day took out a sensational victory in heat two, setting him up further for the weekend with a second in heat three and win in heat four having him in excellent shape. Cohen was able to put in a superb performance, leading every lap of the final and coming away with victory for the Tecno Karts Australia team!

Desmond Harral trekked across the South Australian border and took his place in the Tecno Karts Australia team in the Cadet 12 category. Harral put himself on the second row of the gird in qualifying in position four. Desmond was able to move into the top three for a strong heat one result with position four consolidating his positive racing start. Another third in heat three and a best finish of second in heat four had him right in the front battle. Harral was able to come through in the final for a strong second position overall and on the podium for Tecno Karts Australia!

Hugo Garraway and Mason Day were a two driver Tecno Karts Australia attack on the KA4 Junior National Heavy category. Garraway did an excellent job in qualifying putting himself on the front row of the grid with Day right behind in position three. Garraway had an excellent four heat races with a win in heat two and second in the other three heats the highlights. Day had a third in heat four but sat in position four in the first three heats. Garraway was able to round out his weekend on the podium in second position overall with Day just outside the top three in fourth position overall!

Garraway was up again in KA4 Junior Light with Tecno Karts Australia team mate Aston Hill. Hill put in a scintillating lap in qualifying to take pole position with Garraway on the second row of the grid in fourth spot. Hill and Garraway shared the opening two heat wins with Hill taking control in heats three and four. Garraway had another strong second in heat three but a DNF in heat four hurt his starting chance for the final. Hill was able to continue his near perfect weekend and open up margin and take victory for the Tecno Karts Australia team. Garraway was able to regroup and come home on the podium in third spot overall.

Team owner Lincoln Day spoke post weekend on the Tecno Karts Australia team. “Another successful weekend of racing with podiums in multiple classes. Racing under lights was something special and we were super proud to watch Tecno dominate once again. We are very proud of all the drivers! A special mention to all the Tecno drivers taking wins in Victoria, New South Wales and Queensland over the weekend”. Tecno Karts Australia have had a massive fortnight and will be looking to continue this form in the back end of 2022!