Tecno Karts Australia is back on the map in Australian Karting!

Tecno Karts Australia is back on the map in Australian Karting! 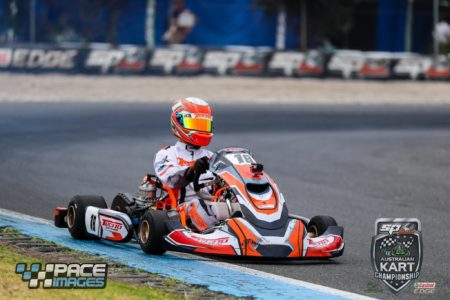 Australia! Tecno Karts Australia took a team of nine drivers across six classes to the opening round of the SP Tools Australian Kart Championship over the weekend. All drivers had completed large amounts of preparation for the meeting and season and they were looking to get the iconic brand back up to front where it belongs!

Tecno Karts Australia’s youngest driver Blake Haigh led the charge and got the team of to a brilliant start putting his kart on the front row of the grid. Haigh had a brilliant Saturdays racing taking a strong win in heat one. Blake was able to back that up with a strong second and third in the remaining two heats on Saturday. A Sixth place finish in the final heat had Haigh off the front row of the grid for the final. In a superb weekend racing by the young Tecno karter, Blake was able to come away with position seven in the final in a fantastic display of driving!

Matthew Smith flew the flag for the Tecno Karts team in the premier KZ2 gearbox class. Smith was up against a near full field of thirty six drivers. Smith qualified in the top half of the field in position seventeen. Smith had mixed heats moving up to position nine in the opening heat. The following two heats Smith was classified down in seventeenth and position twenty eight in heat three after running in the top ten. Smith got back inside the top twenty in position eighteen. Matty charged through the field in the final coming home with an excellent position ten overall!

Aston Hill was flying the flag for Tecno Karts Australia team in the KA4 Junior category. Hill did a great job in qualifying against some of his more experience rivals, setting a time just outside the top twenty in position twenty two. Hill’s weekend went horribly wrong from there, only finishing one race on Saturday and no races on Sunday. Hill’s pace was strong and he’ll look to bounce back for the rest of the season.

Marcus Pisani and Rayner Costello were the dual effort for Tecno Karts Australia in KA3 Senior. Both drivers made the top half of qualifying with Pisani setting the thirteenth fastest time and Costello just being outside the top twenty in position twenty two. Pisani’s weekend unfortunately ended early after a roll over, meaning he wasn’t able to compete for the rest of weekend. Costello had a mixed day Saturday with a brilliant sixth place in heat one to kick things off. A DNF in heat two hurt his starting position but he then charged up to position ten in heat three. Costello finished his final heat in position fourteen before an unfortunate DNF ended his hunt. Rayner showed great pace across the four days and will be looking to bounce back at the next one!

X30 was a star studded line up with the Tecno Karts Australia team having representatives Harrison Draffin and Riley Jabke. Draffin led the charge in qualifying setting the fourteenth fastest time. Jabke was just outside the top twenty in position twenty four. Both drivers had strong heats to start, with Draffin being as high as position seven and Jabke as high as position eleven. Both drivers had an unfortunate DNF in heat three. Costello’s weekend went down hill from there finishing with two more DNF’s on Sunday. Jabke had a position twelve finish in heat four but then also had a DNF in the final. Both drivers had flashes of brilliance and look to the next round!

The premier junior category KA2 had the final two drivers in the field in Matthew Hansford-Taylor and Cohen Day. Handsford-Taylor had a great start to Saturday finishing seventh in his opening heat. After this, his day was tough with an incident in heat two putting him to the rear and a DNF result in heat three. Day had a great Saturday finishing tenth, fifteenth and thirteenth in his respective heats. Day led the charge on Sunday coming away with a position ten in heat one and just outside the top ten in eleventh in the combined final. Handsford-Taylor was playing catch up from Saturday but had a great position twelve in heat four and a final finish of position eighteen overall. Both drivers had excellent pace throughout the weekend and look to the next round to improve.

Team owner and manager Lincoln Day spoke of his team’s weekend. “A big weekend conquering the first round of AKC! The team did amazing, and most of all everyone came together to ensure Marcus was ok after his accident. The team put so much effort to get where they got to, I’m proud of all of them and we’re now onto the next one! #WeAreTecno.” Tecno Karts Australia have a blockbuster 2022 ahead of them!