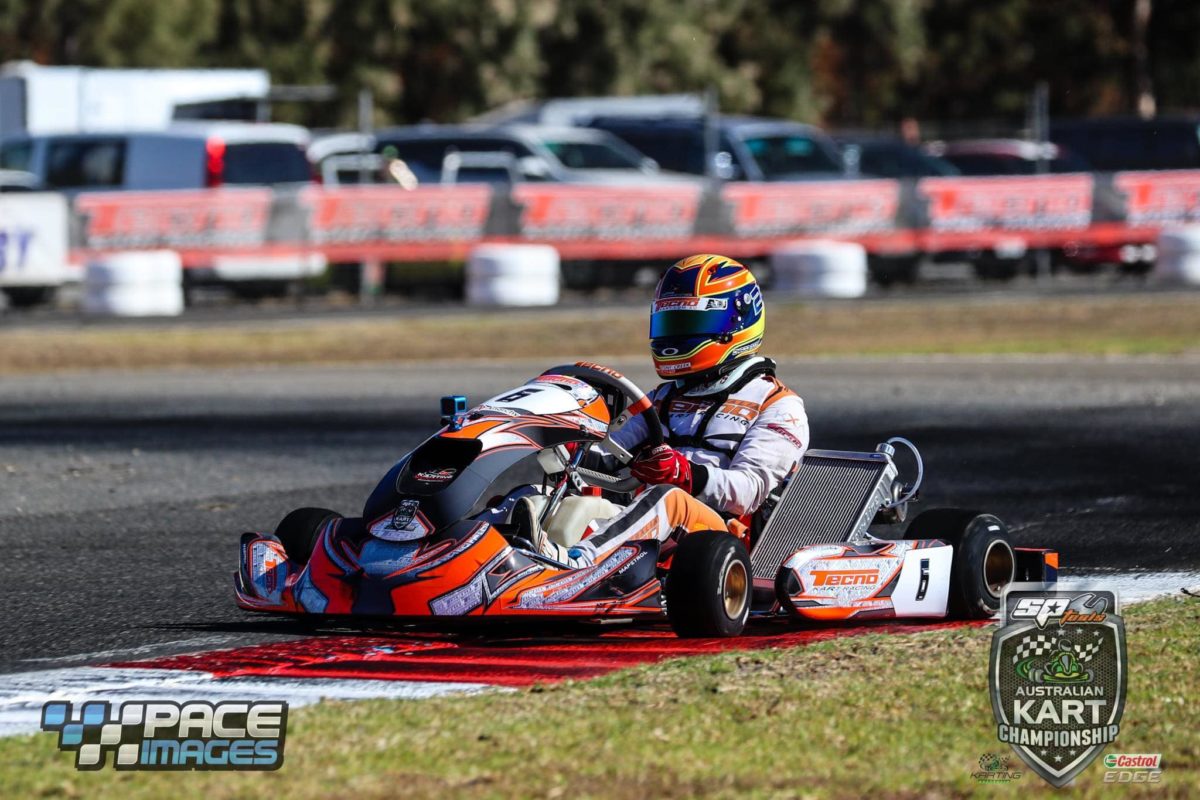 Tecno Karts Australia had a team of eleven drivers entered to take on the second round of the SP Tools Australian kart Championship last weekend. The team headed to Bolivar raceway to continue their charge back into Australian Karting and back on the map of the motorsport ranks. With drivers racing across five classes and from as young as Cadet nine to senior drivers, the team were in for a fast and furious weekend.

Cadet nine had an elite three driver attack in Blake Haigh, Jensen Damaschino and Nick Kinder to fly the Tecno flag. Haigh led the way in qualifying coming home just outside the top five in sixth. Damaschino was inside the top fifteen in position fourteen with Kinder in position twenty. Haigh was the class of the drivers in the heats coming away with two second places. Damaschino worked his way as high as position eight through the heats with Kinder moving forward to position twelve. Haigh looked a live chance for victory in the final but came away on the podium in position three overall. Kinder put in a sensational effort in the final coming home in fifth and having two Tecno Kart Australia drivers in the top five. Damaschino was unfortunately involved in an incident in the final resulting in a DNF result but will take plenty of positives into the next round.

Desmond Harral was the sole Tecno Karts Australia entry in the oversubscribed Cadet twelve class. Harral qualified in position thirty-six in the near fifty kart field and was looking forward to a big weekend of racing. Desmond started with a top fifteen finish in heat one but a DNF result hurt his chances for a final starting spot. A brilliant position eleven in the final heat had Harral starting out of position thirty-four for the final. Desmond did a great job finishing the final and moving up to position thirty overall for the weekend.

Rayner Costello and Elijah Brown took on the ultra-competitive KA3 Senior class with an oversubscribed class to deal with. Costello led the way for the team in qualifying being inside the top twenty in position nineteen. Brown was down in position forty-five with work needing to be done to make the final. Rayner was able to have a couple of top ten finishes in his heats with an eighth spot being his best result. Brown was able to move forward in all heats with a position seventeen his best result. In the combined final Costello finished just outside the top fifteen in sixteenth moving up three spots from him his starting position. Brown was able to make the thirty-six kart final and came home inside the top thirty in position twenty eight moving up a rapid seventeen spots across the weekend.

Harrison Draffin and Riley Jabke were the two Tecno Karts Australia X30 pilots hitting the Bolivar circuit. In another near fifty kart field Draffin qualified in position thirty, with Jabke not to far behind in position thirty-six. Draffin led the Tecno charge in the heats, coming home in position fifteen in heat four and a brilliant position ten in heat two. A DNF in heat one hurt Jabke’s points but after this Riley moved forward in every heat with a position fourteen in heat four his best result. Unfortunately, due to his DNF in heat one Jabke missed the final field by one spot and Draffin was left to do battle starting out of position thirty-two. Harrison had a consistent race moving into the top thirty and coming home in an improved position twenty-nine overall.

KA2 had a rough start to the weekend before racing even began, with Matthew Hansford-Taylor being ruled out due to COVID 19. This left Cohen Day and Chadd Moore to fly the Tecno flag. In the fifty kart field Day was able to lead the way in qualifying, settling in position thirty three with Moore not far behind in position thirty seven. Both drivers were able to finish all four of their heats with Day grabbing position eight in heat two and Moore position fifteen in heat four. Both drivers were able to make the final but were unfortunately involved in incidents resulting in DNF’s.

Team Owner Lincoln Day spoke post weekend of the team’s results. “We are so proud of all drivers over the weekend. Tecno was in full force and each and every driver drove as hard as they could! Another weekend of proudly being Tecno”. Tecno Karts Australia will be back on track this weekend taking place in the Victorian State Championships at Eastern Lions.