MEDIA RELEASE: It’s no secret that the 2015 East Coast Bullbars Australian V8 Ute Racing Series’ drivers are competitive individually’ but so are the teams, and with the coveted 2015 Teams Award up for grabs, with the final round looming at the Coates Hire Sydney 500, 4 – 6 December, three teams are in contention to take out the prize.

Matt Stone Racing team currently leads with the two front running drivers Ryal Harris and George Miedecke both in with a chance of the Championship.

“I’d be pretty happy if we could take it out, it’s our first full year in the Utes, I came in wanting to have a real good go and we’ve achieved that and then some,” said Team Principal Matt Stone.

Erebus Motorsport also have two drivers in contention for the Championship, Adam Marjoram who is currently in 3rd overall, Kim Jane in 7th and their third driver Craig Dontas in 11th.

“The guys have had their ups and downs this year but all in all driven really well, the team has done a great job preparing the cars and it would great to reward them and Erebus Motorsport with the Award,” said Ryan.

Peters Motorsport who run, Kris Walton, Ryan Hansford, Cam Wilson, Peter Burnitt and Mason Barbera are also kept in the hunt with Walton currently placed in 4th, Hansford in 8th and Wilson just outside the top ten in 13th. 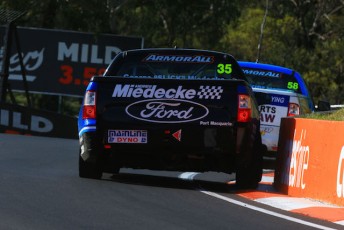 A team that knows all too well what it takes to win the award are 2014 winners Sieders Racing and with David Sieders still in the title chase currently in 6th teammate Jeremy Gray in 9th and Rhys McNally in 12th they are still a good chance to take out the award.

“It would be awesome to win it again, taking out the award last year was great, there’s something when you have so many cars it’s obviously a hard thing to get across the line you have the good results but you have the bad one’s as well so to have an overall good year it was great,” said Sieders.

All the above teams have more than two drivers, but a team that is doing it solo is Gerard McLeod’s McLeod Racing Team, the Melbourne based driver and former V8 Supercar Mechanic is currently 5th in the Championship and would love nothing more than to show the big dogs that he can win the title, especially after posting numerous podiums and race wins already this year.

The Teams Award along with 11 other Awards will be announced at the 2015 Presentation Night on Sunday, 6th December in Darling Harbour, NSW.