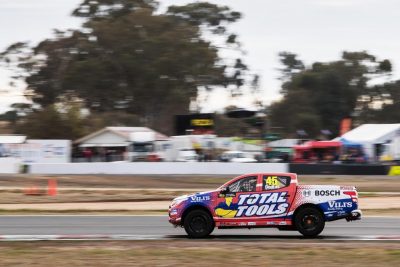 Craig Dontas will be joined by Elliot Barbour at the Townsville 400 for the 3rd Round of the SuperUtes Series.

Barbour who has experience in a variety of classes including the V8 Ute Racing Series, Australian GT, Production Cars and Historic Touring Cars, will be stepping in the #87 Mitsubishi Motors Entry in place of Toby Price who has other off-road racing commitments.

The #87 will run official livery from Mitsubishi with a newly confirmed Triton partnership for the season at the North Queensland Round.

Barbour joined Dontas at the Winton test in mid-April and the duo was back behind the wheel at Sydney Motorsport Park earlier this month where they were both impressed with the improvements on the Tritons.

“I’m pumped to jump in the #87 Team Triton SuperUte. I managed to get a couple of laps behind the wheel a few weeks ago in Sydney and it felt really strong. I’ve always loved the Townsville track and can’t wait to get on track and put on a show for all of the supporters.” – Elliot Barbour

Dontas is 9th in the standings after encountering a number of issues across the Adelaide and Winton events and is hunting for some solid results to climb back up the Championship ladder.

Dontas is looking forward to carrying on from Winton with the promising speed in the Total Tools Triton after the test days assisted on developing the reliability of the car.

“We’ve gone to a different spec turbo and then we’ve used engine mapping to make the turbo work efficiently. We’re working with the technical guys and our engine builder Craig Haysted and we’re getting smarter every time we spend some time on the track, which is making the car better.” – Craig Dontas

Round 3 of the SuperUte Series is being held at the Townsville 400 from July 6-8, with all races to be televised LIVE on Fox Sports.