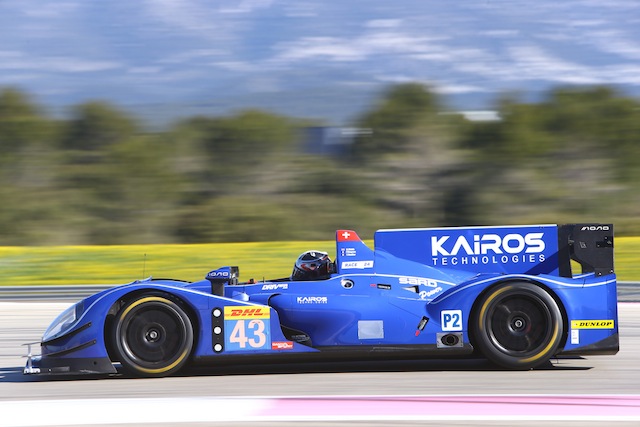 For TEAM SARD MORAND the 2015 season is starting at last in Belgium on Saturday May 2 at the 6 Hours of Spa-Francorchamps WEC, the second round of the World Endurance Championship (WEC), with new driving line-up, sponsors and great expectations.

After the absence at the 6 Hours of Silverstone in April, the team’s involvement in the 2015 WEC is turning out to be a single-car entry in the LMP2 class of the 2015 WEC.

TEAM SARD MORAND is keeping its “lucky number” 43 for the Morgan EVO SARD driven by Pierre Ragues from France, Oliver Webb from Great Britain and Zoel Amberg from Switzerland.

The team is also welcoming a new sponsor from its Swiss homeland: timepieces manufacturer Franck Muller.

At the end of March, TEAM SARD MORAND experienced a promising Prologue at the Paul Ricard circuit, rapidly setting times in the top 5 of the LMP2 class.

So the fact of competing with one car does not reduce the team’s ambitions in terms of race results, targeting the top positions of the category.

The 6 Hours of Spa-Francorchamps WEC usually are the “dress rehearsal” for the 24 Hours of Le Mans.

So the team will also get as well-prepared as possible for the for the Great Race in La Sarthe, to be held on June 13-14.

Benoit Morand (Team Principal): “I am really looking forward to get back in race again and the Spa-Francorchamps circuit probably is one of the most beautiful places for it.

“During all our pre-season work in Spain and France, the 2015 evolutions of the Morgan chassis proved efficient, setting great times especially at the Prologue of the Paul Ricard circuit.

“We can also rely with Pierre and Oliver on a pair of drivers who previously were victorious in endurance racing, and Zoel learned very much about the car and from his team mates during the off-season.

“TEAM SARD MORAND definitely is back into LMP2 the battle, and I would like to thank all the people who sent us positive messages on the social networks, all the crew, our new partner Franck Muller and especially my wife Gladys for her precious support.”