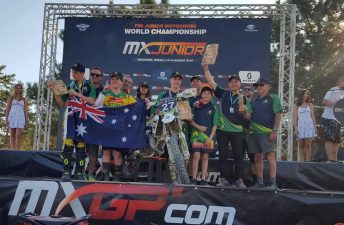 MEDIA RELEASE: Motorcycling Australia (MA) is now calling for expressions of interest for Australian Team riders and a Team Manager for the 2017 FIM World Junior Motocross to be held at Lange Motokeskus in Estonia, on the 30th July 2017.

Riders and Team Managers wishing to apply for an Australian Team position in this year’s FIM World Junior Motocross will need to consider that while MA will contribute some funding to the team, there may be a greater cost to individuals than in previous years.

The expected time away for this year’s FIM World Junior Motocross will be approximately 10 days, with further details to be confirmed at a later date.

The FIM Junior Motocross World Championship will consist of the following two classes:

Currently, we are still awaiting on full confirmation from the FIM on further information.
Motorcycling Australia would like to thank previous Team Manager Glen Macdonald for his dedication to the team over a number of years.

Further information can be found on the application forms at www.ma.org.au/forms

For more information head to www.ma.org.au