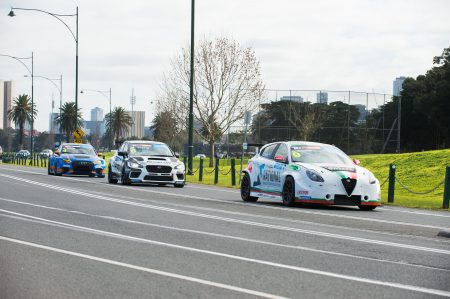 Seward’s ASM team runs an Alfa Romeo Guilietta, which has been driven by Dylan O’Keeffe to a pole position and two race wins so far in this year’s series. O’Keeffe and the Alfa were enthusiastic participants in today’s official announcement, held at the Albert Park street circuit.

“Of all the motorsport categories that have been introduced into Australia recently, TCR has been by far the most successful – it’s attracting good-sized fields, drawing very healthy spectator numbers and producing some entertaining racing,” Seward said.

“The fact it’s already been able to secure a place on the program at one of the country’s most prestigious race meetings is fantastic, and just demonstrates the hard work and professionalism of the Australian Racing Group in running the category.

“For Dylan to have the chance to drive the car around Albert Park this morning, while it’s operating as a public road, was pretty cool as well!”

The next TCR Australia round will be held in just over a week’s time at Queensland Raceway, and Seward is happy with how the program is progressing so far.

“I’m really proud of how quickly Dylan has adapted to driving a front-wheel drive race car, after spending his entire career in rear-wheel-drive cars,” Seward said.

“His overall pace at each round has been sensational – he hasn’t qualified outside the top four and he’s won a couple of races. He had a little bit of bad luck, especially with the crash at Phillip Island, but he’s still inside the top three in the championship.

“We’ll keep working hard behind the scenes to ensure we provide Dylan with the best-possible package to fight for the title,” Seward concluded.