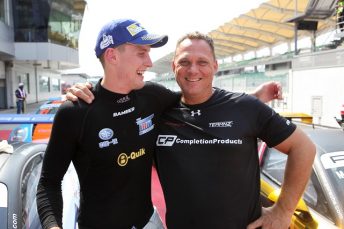 Graeme Dowsett seen with Will Bamber

Team NZ Motorsport is pleased to announce that we will be getting our 2018 racing season off to a bright and early start by joining Asian Le Mans Series 2017/18 at Chang International Circuit, Buriram, in three weeks’ time (11-13 January), for the penultimate round of the pan-Asia sportscar championship.

Our regular driver roster, Graeme Dowsett (New Zealand) and John Curran (Ireland), will be behind the wheel of the #77 Porsche 997 GT3 Cup as usual but we’re delighted to confirm that Will Bamber will join us to complete the crew for the 6-hour endurance race. The 24-year-old New Zealander, who has been a long-time regular with the team, as well as playing the additional role of Team Manager and Driver Coach, will slot in perfectly to give us a very well rounded line-up.

Contesting the second to last round of the Asian Le Mans 2017/2018 season was a logical step for Team NZ as we come off the back of winning last summer’s 3-round/6-race Asian Le Mans Sprint Cup ‘GT Cup’ for the second consecutive year. It proved to be a superb season in the ‘Sprint Cup’ as we comprehensively won the Drivers’ and Teams’ championship after claiming victory in five of the six races despite facing tough opposition all the way. John and Graeme, as well as the whole team, really raised their game this year and took a big step forward. It was our second double title win in ‘Sprint Cup’ and the second year we won five of the six races.

With the title comes a free entry into Asian Le Mans 2017/18 so it was entirely logical we make good use of that extra bonus and get our year off to an early start by lodging an entry in the 6 Hours of Buriram, which has been extended by 2-hours for the 2018 edition as last time it was held, back in January of this year, it was run as a 4-hour race.

Buriram in January is going to be something of a revisit for Team NZ as this year we also kicked off our racing season in Asian Le Mans Series at Buriram. Then Graeme and John teamed up with local driver Paul Kanjanapas and victory in the GT Cup class was a superb result. Then it was a 4-hour race, with the increase to 6 hours we will have to work longer and harder but we’re certainly aiming for back to back wins.

We have a very good pedigree in halfway-round-the-clock endurance races too, four entries – four podiums. We have a victory (2014), a second place (2015) and a third place (2016) from three entries into the Sepang 12 Hours while in the Bathurst 12 Hour we have a third place from our sole entry in 2016. So, Team NZ can certainly take a 6-hour race in its stride.

It’s been a good year for us and, as well as that victory in Asian Le Mans Series at Buriram back in January and the Sprint Cup title this summer, Team NZ also planted its name on the Porsche Carrera Cup Asia (PCCA) entry lists for the first time during September’s high-profile round which supported the Singapore Formula 1 Grand Prix. Racing on the rain soaked Singapore Street Circuit, Graeme acquitted himself superbly on what was his first time behind the wheel of the current-generation Porsche 991 GT3 Cup as well as his first time on this temporary track and that’s put in motion planning for a new and very exciting direction for the team during the bulk of the 2018 racing season.

It’s also been a superb 2017 for Will as his career has picked up the pace. He finished third in PCCA on his full season debut taking wins along the way, including a double victory at the Bangsaen Grand Prix round, while he also finished runner up in China GT driving a Lamborghini Huracán. That superb form earned Will a shot at the coveted Porsche Carrera Cup shootout in Germany, a real statement on just how far he has progressed in a very short period of time.

Graeme Dowsett: “I’m looking forward to joining the Asian Le Mans Series midway through in Buriram. It’s great to have Will on board for the 6-hour race so we’re all looking forward to putting in equal stints. He of course brings a lot of talent with his recent successes in PCCA. The team is all geared up and excited and I’m very much looking forward to getting out on track.”

John Curran: “I’m really anticipating the start of the 2018 season, getting it underway with a 6-hour endurance race. Nice to have the old line up again with Will Bamber, Graeme and myself taking up duties in Buriram. Nice also to be able to secure Will ahead of another busy season for him. The car is ready, the team is ready and I just hope I’m as ready as it’s been since August that I last raced the car. Either way, we will have fun and be competitive.”

Will Bamber: “It’s amazing to have the gang back together and to kick start 2018 in Buriram. I always enjoy working and racing with this great team and they keep going from strength to strength. Hopefully we can follow on from their championship success this year.”