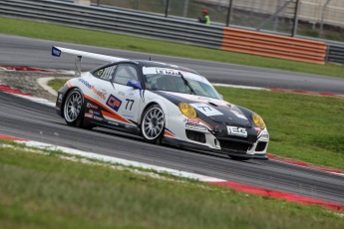 We consider ourselves to often have been a ‘lucky’ team. Certainly we are one of the smallest teams on the grid and we have fewer frills than most, but during our four years of racing we have punched well above our weight to secure some excellent wins and podiums.

Last weekend, during the second round of Asian Le Mans Sprint Cup 2017, that luck seemed to ebb and flow as we hit technical problems and throughout the event’s four days we had to manage an underlying fuel system issue that stubbornly remained unresolved.

Despite all that we were able to successfully drive around those problems and were lucky to win the first race to extend our championship advantage. In the second race we were hit hard and had to nurse the car to the finish although we still claimed second place, pretty lucky really to finish, although it certainly didn’t feel like it at the time. That though cancelled out our overnight classification gains and we departed from Sepang Circuit in a very similar position to how we had arrived.

We were also pleased to welcome Nick Foster back to the team last weekend, the young Australian, who first drove for us during the Bathurst 12 Hour last year, drafted in to cover for John Curran who couldn’t make the weekend due to business commitments.

We barely strung a couple of laps together during the practice sessions on Thursday and Friday such were the problems that kept rearing and the crew pulled out late nighters. We worked through the outstanding issues eventually, apart from a fundamental fuel pressure problem, but after exhausting all the options available to us at the track we would have to manage the situation going forward as best we were able.

However, the car was in good shape during qualifying, albeit it completed only two short runs, but the superb efforts of Graeme and Nick, in Q1 and Q2 respectively, was enough to earn us GT Cup pole for both races.

Saturday’s 1-hour race saw us racing with our fingers crossed! Graeme started the #77 Porsche from GT pole and was scheduled to handover to Nick at half distance.

He converting pole into the race lead after a blistering start but on the first lap the New Zealander was forced to take a very wide line to avoid a spinning LMP3 car at Turn 4 and that dropped him back behind a slower GT3 car and right in front of the GT Cup car in P2. Graeme kept it cool, quickly dealt with the pressure from behind and pushed forward. Soon he found a way past a slower GT3 car just in front of him before using it as a buffer between ourselves and the second placed GT Cup runner.

Graeme then reeled off a string of fast laps to extend our lead and at the halfway point of the race he pitted to hand over to Nick. The young Australian, who is racing a Porsche 991 GT3 in the FIA World Endurance Championship this year, is smooth and fast so bringing our car home safely is second nature to him while he also had a decent breather as a Safety Car period mid-way into his stint gave everyone a break from the green flag action.

A few niggling technical issues, including the fuel pressure problem, interrupted Nick as the race wound down, but nothing that would affect his cushion at the front and he brought the car across the line for the win, that was our third in a row in Asian Le Mans Sprint Cup 2017 following on from a double victory during the opening round, also held here, back in May. In fact, if we count back to last year, that was eight wins in a row in the GT Cup class.

Nick Foster (Australia): “It was a good race for us as we came away with the win so that’s a positive but there were a lot of little dramas throughout the race and still some ongoing fuel pressure problems which hampered our run towards the finish. Some of the things were due to the lack of car time we’ve had this so far weekend, but overall it’s been quite positive.”

Nick started the car from pole and took race lead as the Sprint Cup field enjoyed a very clean getaway at the green lights and quickly he started to pull out a cushion which he continued to build as laps ticked by. However, this time it wouldn’t last and as he pulled in to hand over to Graeme just before mid-distance we were dropping time on every lap as the fuel issues returned to haunt us.

We soon slipped down to P2 with our main championship rivals, PAS Macau Racing, taking full advantage of our ailing car to assume the GT Cup lead and as the clock counted down Graeme was being forced to reboot the car every lap although he was able to nurse the car to the chequered flag. Second place meant an end to our amazing winning run in GT Cup but it was a positive result as the points awarded were crucial towards the championship.

Graeme Dowsett: “The race for us was certainly a little disappointing. Nick started off really well, conserved the tyres and built up the gaps. But the problems we had all week with the fuel started about four laps before the pitstop. So we brought him in a little early, see if we could let the pumps rest and reset. Nick gave me a very good debrief on how to drive around the problem, but in short it got worse during my stint so I had to nurse it home. We got second so we were lucky to finish. So the positive of the weekend is we got a first and a second place but we still have a fundamental problem to solve.”

It all meant we left Sepang in championship classification terms as we arrived, thanks to our Race 1 win and Race 2 second place being replicated the other way round by our championship rivals, with a small extra bonus going in our direction thanks to the points we collected after securing pole in both races.

In the Teams’ championship we now have 97 points, our advantage over the second placed team up by 2 points to 18 points, while in the Drivers’ championship Graeme is on 97 points and leads the standings, 18 points ahead of the next driver. Meanwhile John (52 points) is third and Nick (45 points) is fourth.

A tough weekend certainly and now the team now has to get to the bottom of the problems before the ‘Sprint Cup’ resumes here in a little over three weeks’ time for the final round of the season.

We would like to thank the many people who helped us during our difficult weekend, particularly Infinity Racing, Arrows Racing, Carrera Cup Asia and Carrera Cup Australia.

Finally, we would like to congratulate our sometime ‘Team Manager’ Will Bamber after the young New Zealander sensationally won last Sunday’s round of Porsche Carrera Cup Asia (PCCA), which was also being held at Sepang Circuit. Will showed exactly what he is made of by bouncing straight back having been punted out of the previous day’s race at the start through no fault of his own. Team NZ title sponsor, Completion Products, is also supporting Will this year in his PCCA campaign.