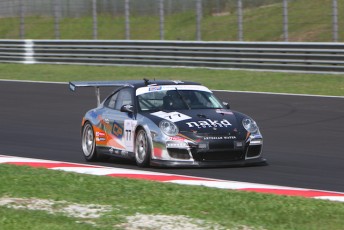 MEDIA RELEASE: Team New Zealand Motorsport will be back in action this coming weekend (5-7 August) as the Asian Le Mans Sprint Cup resumes for its second round, the series returning to Malaysia’s Sepang International Circuit for a pair of 1-hour duration races.

Following our GT class victory at the inaugural event of the season, also held at Sepang Circuit, back in May, we will clearly be aiming to maintain that podium sequence this weekend. Graeme Dowsett and John Curran will be back behind the wheel of the team’s #77 Porsche 997 GT3 Cup as we fully utilise the opportunity of the ‘Sprint Cup’ for both drivers and team to develop further and take another step forward, particularly as we start to look towards our next major endurance race participation.

The Asian Le Mans Series Sprint Cup is a new initiative from the ACO and is reserved for LMP3, CN and GT Cup cars; it builds on the inaugural 2015/2016 season of the Asian Le Mans Series. The ‘Sprint Cup’ events feature two 1-hour long races with pitstops and driver changes with all three rounds taking place at Sepang International Circuit. The opener was held just over two months ago (27-29 May) and saw us take a trip to the top step of the podium in Race 2, then comes this round (5-7 August) before the season wraps up in another month’s time (2-4 September).

The Sprint Cup is exclusively reserved for Bronze and Silver level drivers and that makes it a perfect fit for us, giving John and Graeme a great platform to fight against other drivers currently at a very similar career level.

While Team New Zealand Motorsport is an amateur status team, we are highly ambitious, determined to grow and results-driven. We race because we love the sport but combine that with a professional determination to win. The clear target of this coming weekend, as with the first round, will be to see both Graeme and John improving their pace and laptimes.

That Sprint Cup win added to our superb record in racing so far, notably three podium finishes from our three major endurance race entries, twice on the rostrum in the Sepang 12 Hours and once at the Bathurst 12 Hours, including a stunning debut GT Class victory in the former race in 2014.

We enjoyed something of a mixed debut in the first round of the Asian Le Mans Sprint Cup as technical problems during the closing laps cost us a trip to the podium in the first race, however we dug in and bounced back in Race 2 as John and Graeme drove inch-perfect, raised their game and set new personal best laptimes while the pitcrew performed flawlessly and that all added up to allow us to claim a clear cut victory.

Going into this weekend Graeme and John are equal third in the Drivers’ championship thanks to that Race 2 win and have 25 points apiece. The classification leaders currently have 44 points so there is still all to play for albeit with plenty of work to do if we are going to mount a serious title challenge with two rounds and four races still remaining.

Although we are a truly international team, based in Singapore and with strong New Zealand, Malaysian and Irish connections, we regard Sepang Circuit as our ‘home’ track so we are looking forward to getting back out there this weekend and challenging for the podium.

The organisers’ did a superb job during the first round of the year and we are excited to be back in the Sprint Cup. We also expect to be much better prepared this weekend than we were for May’s season opener as then our Porsche only arrived in the Sepang paddock on the Thursday before the race having been shipped directly from Australia where it had required a major overhaul following the Bathurst 12 Hour and that left us on the backfoot as preparation and setup cost us valuable practice track time.

Graeme Dowsett: “Again, I’m looking forward to the upcoming race weekend. This weekend we will be a lot more prepared with the car in good working order prior to free practice. Our target will be to get some useful test data to review and refine the setup and also for driver improvement. It was great to race with my fellow co-owner of the car, John, for rounds one and two and I look forward to the experience again.”

John Curran: “Graeme and I are looking forward to races three and four as we should be better prepared than the rush from Australia that defined the first round. The car feels great and both of us are showing some great pace.”