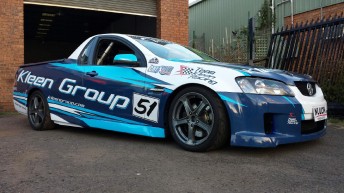 A leading Australian cleaning company has announced it will enter V8 Ute Racing.

Team Kleen Racing, proudly sponsored by Kleen Group will be making its debut at the Perth V8 Supercar round on May 16 with Andrew Nickolls, the Managing Director of Kleen Group the owner/driver of the team.

Kleen Racing will be behind the wheel of the V8 Ute this year, learning the ropes before trying to take a full tilt at next year’s championships.

‘This is a huge step forward for us, I have always been passionate about motor sport and to have the opportunity to get behind the wheel in 2014 is dream come true.’ Andrew Nickolls.

The whole racing community has been so supportive, giving tips on driving, the track, car performance and now the entire team is so excited about getting out on the track in Perth and giving it a red hot go.

Andrew grew up with motorsports in his blood and has been around the track since he was only a few months old. Whilst it will be a learning curve in his first season, he’s not just here to make up the numbers and is driven to go out and go hard.

He’s in a proven Ute, formerly piloted by Gary Baxter and the Ute has won many races over the years.

Kleen Group is looking forward to the exposure that being a part of the V8 Ute series will bring given its popularity.