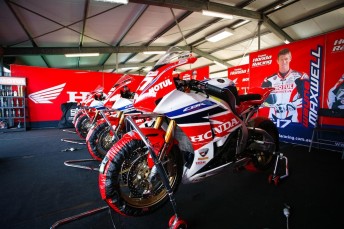 Fresh off the plane from various Suzuka 8 Hour campaigns in Japan, the Team Honda Racing quartet are gearing up once again to compete in Round 4 of the Australasian Superbike Championship at Winton Raceway this weekend.

Team Honda Racing had terrific success at Round 3 ASC, finishing 1-2-3 on the podium and the Honda team will definitely be focused on continuing such dominance this weekend.

An unfortunate crash during the Suzuka 8 Hour event now sees Stauffer heading into this weekend’s ASC Round 4 event with an injury to his left ankle.

However, true to form, Stauffer will not be deterred by the injury and having been cleared to race will be focused on maintaining his championship lead.

Second in the championship is #47 Wayne Maxwell onboard the Motul Honda CBR1000RR SP.

Maxwell is also fresh off the plane from the Suzuka 8 Hour event, but has his sights set firmly on a strong finish at Round 4 ASC.

#17 Troy Herfoss is placed 3rd in championship points heading into the weekend and after taking his first win onboard a Superbike at Round 3 in Queensland last month, Herfoss looks certain for another strong points haul at Winton Raceway on Sunday.

The overall winner from Round 3 in Queensland, #16 Josh Hook will be seeking maximum points this weekend at Winton Raceway as he continues to make up for time lost after being unable to compete at Round 1 of the series due to injury.

At the Suzuka 8 Hour event recently, Hook competed for Honda Team Asia and their successful 7th place finish will no doubt spur Hook on at this weekend’s ASC Round 4 at Winton Raceway.

All 4 Team Honda Racing riders have now gathered at Winton in the lead up to the event and all 4 are eager to ensure that the Honda CBR1000RR SP remains on top.