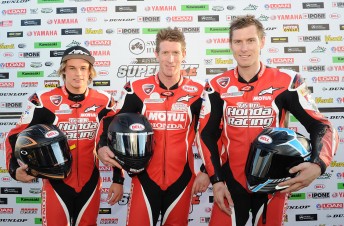 Team Honda celebrate a 1-2-3 at Winton

It was another CBR1000RR SP blitz at the race track for the Swann Insurance Australasian Superbike Championship with Team Honda Racing taking all 3 Superbike race wins and making it a Honda 1-2-3 on the podium for Round 4 at Winton Raceway.

It was not all plain sailing for Team Honda Racing as the championship leader heading into the event, #27 Jamie Stauffer had sustained a fractured left ankle at the recent Suzuka 8 Hour event in Japan and this weekend’s campaign was not easy for him.
“I had a difficult weekend with my injury and really had to work hard to gain as many points as I could.  The injury to my left ankle made it extremely difficult for me to maneuver on the bike so it was a challenge.  I could not have done it at all without the incredible support from Racesafe Australia and in particular, Mark Backway who was there throughout the weekend to assist the team, including myself.  I would like to thank Mark for his help especially.”
Race one for Superbikes set the tone for all three races with #17 Troy Herfoss and #47 Wayne Maxwell doing battle throughout for the win. Herfoss eventually made a conclusive pass to take the Race one win and set a new Superbike lap record for Winton Raceway, a 1:22.605 sec with Maxwell in second place, just .152 sec behind his team mate.  Meanwhile #16 Josh Hook finished fifth and Stauffer seventh.
The second race of the day was equally exciting and the battle between Maxwell and Herfoss raged again, but on lap 8, Herfoss crashed and although he was able to rejoin the race he finished in 17th place.
Maxwell took the Race 2 win and broke his team mate’s Superbike lap record from the previous race, recording a lap time of 1:22.287 sec. It was Team Honda Racing’s Josh Hook in second place and Stauffer finished a solid fifth.
Race three was undoubtedly the most thrilling and nail biting of the day for Team Honda Racing as the Honda CBR1000RR SPs battled again for the final win.
Once more it was Maxwell and Herfoss out in front, determined to make their final mark on the day’s racing. The team mates fought hard for the race win, but ultimately Herfoss out-foxed Maxwell on the final turn to take the race win by just .081 sec.  Josh Hook made it a Team Honda Racing 1-2-3 for Race 3 when he passed Glenn Allerton on lap 7 and did not look back. Stauffer held strong despite his injury to finish seventh.
Round 4 at Winton Raceway saw Team Honda Racing paint the podium red as they took 1-2-3 overall for the event with Wayne Maxwell taking the Round honours, Josh Hook in second and Troy Herfoss in third.
The Australasian Superbike Championship also reflects the Honda domination to date with Maxwell now placed 1st on the points tally with 248 points with Stauffer in 2nd place in the championship on 234 points and Herfoss on 210 points.
Maxwell is happy to be leading the championship after Round 4, saying “The weekend went well for us and it is great to see Team Honda Racing 1-2-3 for the weekend and in the championship points.
“The Motul Honda CBR1000RR SP has performed extremely well all weekend and it is reflected in the results.
“I am really happy with the race win and to take the overall for Round 4.  It is great to be leading the championship going into Round 5 at Wakefield Park in September.  We still have 2 rounds to go so there is still work to be done, but well done to the Team on a very strong weekend of racing.”
In second place for Round 4 ASC, Hook is happy with the overall result, saying “It was a difficult weekend for me, but in the end I was able to finish in second for Round 4 which is a strong result.
We didn’t get much dry track timeon Friday which put us behind the eight ball and we seemed to be a bit off the front of the field during the weekend.  However, overall I am happy to finish where I did and will keep moving forward from here and focus on the remaining races.”