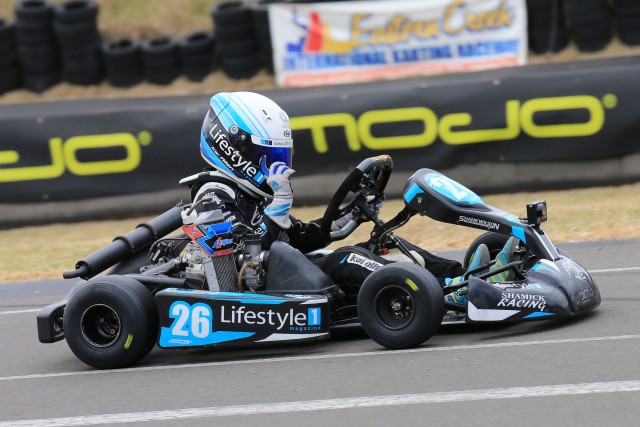 Team CRG’s Kai Allen on his way to victory

MEDIA RELEASE: Team CRG Australia drivers have swamped the podium at the Eastern Creek round of the Rotax Pro Tour, with Kai Allen taking yet another major victory in the Mini Max class.

Allen was dominant throughout the weekend and clean swept qualifying and every race.

His fellow Shamick Racing-backed CRG pilot, James Wharton continued the rivalry he’s building with Allen. Despite missing the pace in qualifying (9th), Wharton moved his way through the heats to finish second in the final.

Making it three CRG’s in the top five, Angus Giffin finished in fourth placing, in the process confirming CRG as arguably the premier Junior chassis in Australian karting at present.

Things weren’t as positive for Adrian Haak – Haak got involved in some incidents in the Pre-Final and Final which thwarted his ability to score a strong result, not finishing the final.

European Rotax Champion, Pierce Lehane made his return to Team CRG complete with a podium finish. The Sydney local had been atop the chart for every single session and race before contact on the third lap of the final dropped him to seventh. He was able to pick his way forward to second. Meantime, Thomas MacDonald generated another solid Rotax Pro Tour result finishing eighth in the super tough field.

In DD2 Masters, Newcastle’s Mark Flood in the McLaine Motorsport-backed CRG took an outstanding third placing, whilst Jason Hryniuk was running inside the top three and drifted back to seventh. Lee Adams did a sensational job after not finishing the pre-final to charge through for 12th.

In DD2, defending Rotax Rankings points winner, Jason Pringle didn’t have the best start to the weekend, qualifying deep in the pack. He was able to push forward in the final to come home in a creditable fourth placing.

Sydney-sider Matthew Erdmann’s good run of form on the national scene continued. He was able to bring his kart home in ninth spot in the 24 kart field.

“It was a very good weekend all round,” said Team CRG Australia’s team manager, Darren King. “Kai was dominant right throughout and all of our juniors continue to raise the bar every single time they head out on track.

“Pierce did a fantastic job. He only received the new KT2 chassis a week before the event. He ran it standard out of the box and did a great job. Being knocked back in the final was unlucky. The field is notoriously tough, so he showed his true class being able to work his way back to second after being knocked back so much.

“Mark Flood did a fantastic job to get on the podium, we’re super pleased for him and also Matt Erdmann is in a great patch of form at the moment, which is good to see. Overall, we walk away from this event happy with our performances.

The next event on the national schedule for Team CRG Australia is May 13-15 – the third round of the Australian Kart Championship, presented by Jayco and Castrol EDGE at the Monarto facility in Murray Bridge, South Australia – around 45 minutes from Adelaide.
Pic by Cooper’s Photography