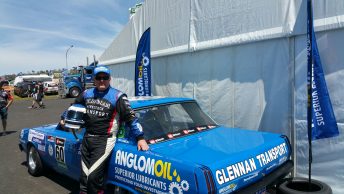 ANGLOMOIL has been supporting Cameron this season and decided that Mount Panorama, the home of Australian motor sport, was the ideal location to launch the new blend.

Cameron has come to The Mountain with a new 265 cubic inch hemi straight six engine. He is trusting the new oil to protect his engine on the gruelling Mt Panorama Circuit this weekend where he will reach 8000RPM on Conrod Straight.

He had been using an engine oil sourced from the United States which is used in NASCAR racing, and said that after the practice sessions with GTR60 it was the first time he had returned to the pits still with oil pressure.

Despite giving away a lot of horsepower to the V8 cars Cameron was 5th fastest in P1 and came 14th out of 54 cars in race 1. He said this year he is a second quicker in his lap times compared to last year at Bathurst.