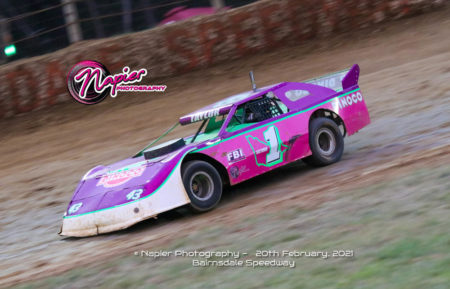 On Saturday night at Bairnsdale Speedway in beautiful East Gippsland, a second Covid lock out in succession for the operating association was secured with one thousand fans able to sit back and watch the Victorian Unlimited Sedan state title, a big feature for the Sprintcars and the Bairnsdale 500 for Limited Sportsman along with support from the Division 2 Hot Rods and the Standard Saloons.

Warrick Taylor from Cranbourne went on to win a thirty-lap title race for the Unlimiteds to three peat as state champion. Dennis Jones from the Latrobe Valley won the Sprintcars and another from the Valley Daniel Stewart won the Standard Saloons whilst Bairnsdale racer Matthew Hurley won the Limited Sportsman and Scott Angus from the South East of Melbourne won the Division 2 Hot Rod final.

The Unlimited Sedan class were competing for the right to have their race car adorned with the number one on it for the next twelve months just as Warrick Taylor had for the last few seasons due to various reasons including winning two titles and the Covid pandemic. Taylor won two of the four qualifying races in the lead up to the final, with Peter Cox and Lennie Bonnici winning the other two.

Taylor qualified on the front row with Bonnici with Cox behind them with Stan Brown, Travis Ramsdale and Anthony McKean securing top six starting positions after qualifying. Taylor had an engine change since Wangaratta a fortnight prior and despite being a dominating driver in the class, there was belief that the race was on to be second just in case things went awry in the champions car. Early in the race, Cox was able to put pressure on Bonnici and make a pass into second spot.

Wayne Eames, Darren Nelson, and Lennie Bonnici all succumbed to issues with their race cars and the laps rolled on with Taylor at the front. In the field Travis Ramsdale whom had been sent to the rear of the field during the race and the likes of Johnny Young and McKean had some great racing and Brown motored along nicely in third spot, trying to catch Cox. The chequered flag dropped, and Taylor secured an impressive three peat from Cox, Brown, Young and McKean.

Heartbreak struck twice in the A1 Cup Sprintcar final supported by A1 Trailers and A1 Solar & Electrical when first David McKay who had led the race for the first fifteen laps before spinning himself out of the race lead and then Adam Greenwood who was fastest through the race in the lead or not, tipped over in his side trying to avoid a stricken Mark Laity in turn one who had spun ahead of him. Greenwood lost the lead here to Dennis Jones who then took the field to the finish line in a big Victorian Sprintcar Association feature event. Shane Steenholdt finished second with Justin Barton, Mark Noonan and Jordan Abbott rounding out the top five.

A great race in the Mitchell Excavations supported Bairnsdale 500 for Limited Sportsman began with Trent Wilson leading Troy Curran and Matthew Hurley. Wilson who had his car on song for the first five laps then broke a gearbox and headed infield as Hurley took control of the race. Hurley was consistent in the final despite others completing faster laps than him and went on to win from Curran, Tim McKenzie, and Paul Hadden the only other finisher after Mark Both watched as a wheel sheered off the rear of his car and went flying the down the front straight to cross the finish line completing more laps than he did.

Daniel Stewart in the Standard Saloons led from start to finish in a fifteen-lap final with Jacob Vuillermin trying on occasions to get past his Rosedale Speedway clubmate. Drivers having good runs were lost to damage or mechanical failures along the way such as Russell Stuchbery who hit the concrete wall hard, Patrick Vuillermin, Bobby Devine, Rhys Lansdown, and Brad Dickson and at the end of fifteen Stewart took the win by less than a second with Jake Vuillermin, Steven Danks, Andrew Cormack, and Joshua Thomas rounding out the top five spots.

In the Division 2 Hot Rods, drivers put their hands in their pockets to offer Scott Angus $100 extra to win if he started rear of field and won the race. As top qualifier Angus led the field onto the track and then as he hit the front straight made the decision to drop back and start at the rear of the field. It took five laps of the fifteen-lap final and after his brother Daniel led the first four laps, Scott Angus took control from that point. Soon after, Daniel Angus looked to be spun around and however the Steward either did not see the incident or seen it differently, in any regards Angus was put to the rear of the field. Scott Angus took the win from Leigh Mitchell, Mel Tatterson, Kane Gibson, and Troy Hutchison.