Satisfying, that was the best word Warrick Taylor used to sum up how it felt to successfully defend his Victorian Unlimited Sedan Title last Sunday afternoon at Drouin Speedway. 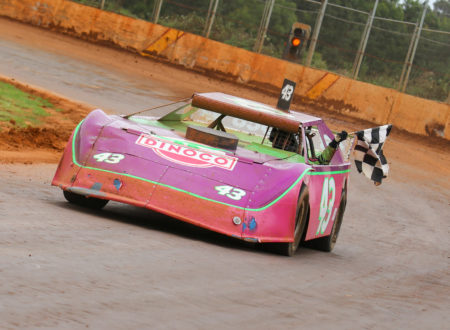 Heading into the event as the defending champion is certainly no easy feat, but it was one that Taylor managed to handle, despite things not going exactly to plan, especially during the Victorian Title deciding feature race.

After qualifying for the feature race on pole position after he had finished his three heat races with a pair of second places and a third place, Taylor was forced to do the chasing in the first half of the 30-lap event. Taylor’s team-mate and good friend Peter Cox, who had started on the front row alongside him, got the jump and paced the field up until just after the mid-race distance.

Taylor had driven consistently throughout the opening half of the feature race and he had to look after the tyres aboard his DS # 43 Taylor’d Fabrications supported car, and by lap 17, it had rewarded him with being able to take the lead away from Cox.
Once out in front, Taylor was able to dictate the pace for the remaining 13 laps and went on to greet the chequered flag as a comfortable winner for what was back-to-back Victorian Title wins.

For Taylor, he was very pleased to be able defend his Victorian Title amongst such tough competition on a challenging Drouin Speedway track that commanded a great car setup in order to come out on top.

“To win another Victorian Title is a great achievement and something that I’m very proud of,” expressed the Cranbourne, Victoria-based racer, whose only disappointment was the fact that his good friend Peter Cox was unable to finish and therefore not complete a 1-2 finish.

“It’s hard enough to win one Victorian Title, so to be able to go back to back makes it all the more satisfying.”

Taylor continued by saying one of the keys to his successful Victorian Title defence was picking the right tyre choice and then going on to drive to the track conditions.

“Knowing very well that the track would go black due to the day conditions, so I knew that picking the right tyre choice was vital, which was what I managed to do,” he said.

“In saying that, I knew that I had to look after my tyres, as I had went with a medium tyre compound choice, in the first half of the race, and it all paid off for me with the best possible result.”

With now back-to-back Victorian Titles in the Unlimited Sedan class, Taylor has now added to his pair of Victorian Mini Sprint Titles that he won back in 2008 and 2009.

Taylor’s plans for the rest of the 2019-20 season are to contest the remaining rounds of the Lucky 7 Series for Unlimited Sedans, along with the Alexandra 100 Lapper on the June Long Weekend and the Alexandra 3 Hour Enduro in August.

Taylor would like to thank his 2019-20 season sponsors: Taylor’d Fabrication. Special thanks must also go out to his crew Shane, Murray and Frank, along with his partner Kellie and their two children Ryder and Cruz.