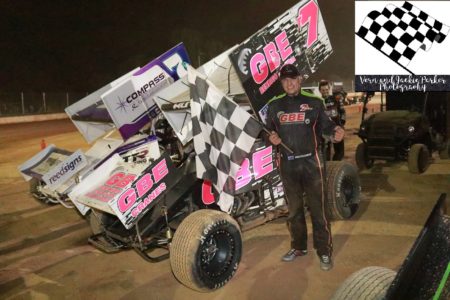 Wangaratta City Raceway held its annual huge Sprintcar Racing Association feature night with drivers coming into town via New South Wales, South Australia, Tasmania, and all over Victoria to compete and Tim Hutchins, a Tasmanian who leaves his race car in Victoria and fly’s in and out as required went home with the big win, on Saturday night.

In other action on the night, Martin Heiner won the Sports Sedans final, Marty Bassett the Junior Sedan final and Trevor Evans won the Standard Saloons.

Hutchins started the evening in the Sprintcars timing fastest in the time trials. Four heat races with each racer having two races were completed with Albury’s Grant Anderson picking up victory in the first, Daniel Pestka in the second, Luke Thomas taking the third and Andrew Hughes winning the fourth and final heat race.

The feature event was set for a thirty-lap race distance with Hutchins, Anderson, Brett Milburn, Pestka, Terry Rankin and Grant Stansfield the top six starters in a field of eighteen drivers. Hutchins took control of the lead on lap one as Anderson slipped back behind Milburn and Pestka. Anderson snatched a spot back on lap six moving into third before his night finished the very next lap infield.

At lap ten Hutchins lead Pestka, Milburn, Rankin and Rhys Baxter as Milburn and Rankin traded spots over a couple of laps a few laps later. With ten laps to go Hutchins’s lead Pestka still and over the next ten laps Pestka tried however could not get passed to take the lead. Hutchins the winner from Pestka, Rankin who pipped Milburn and Baxter.

The Junior Sedan final was sensational as two of the states best and both from the nearby Corowa-Rutherglen club Marty Bassett and Marcus Maclean kept each other motivated and on their toes. In the final Bassett took the win by just .058 at the line, the smallest margin of the night. Maclean was second in front of Jordan Tewkesbury, Mia Lamb and Cooper Lack.

In the Sports Sedan final Martin Heiner had returned to racing. A few seasons ago, Heiner won quite a few finals in a little old VL Commodore. Now in a later model Commodore Heiner began the final with Felicity Roycroft from the front row and the likes of Josh Service, Matt Sgroi, Dennis Reid, and Brendan Harper behind them.

Heiner took the lead on lap one with Roycroft keeping him honest. Harper was in the top five before he exited the race. At the chequered flag Heiner took the win from Roycroft by just .378 of a second with Service only .201 behind Roycroft in third. Sgroi finished fourth and Kellie Lamb finished in fifth spot.

Wangaratta City Raceway returns to action on the 26th of February with the Ned Kelly Cup for Modified Sedans the feature event along with Production Sedans and all the club classes.