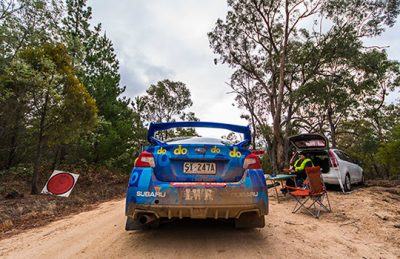 Australia’s best rally teams will be kept on their toes at this weekend’s Subaru Rally Tasmania as they face all-new special stages in the forests around Launceston.

The CAMS Australian Rally Championship (ARC) returns to Tasmanian shores this week for the first time in 10 years, with 240 competitive kilometres on roads that haven’t seen rally action in 20 years.

Championship contenders agree that they will need to be on the ball at Thursday’s reconnaissance to ensure they nail the event’s 17 special stages.

“I’ve been fortunate to compete in the ARC for a number of years and competing on similar roads all the time, it’s exciting to have new, fresh roads.

“We don’t have any notes from previous years so we need to make sure that our reconnaissance is spot on, Ben [Searcy] and myself, I’m confident in our ability to write fast notes.”

While Evans and co-driver Searcy hold a 25-point buffer in the Championship standings, Evans knows he cannot afford to back off.

“The way the points system works in the ARC it’s really tight and it’s really challenging to gain a lead on your opponents.

“We can come away this weekend and win the event and still only be 32 or 33 points in front which is not even a heat.

“The points system rewards consistency more so than speed so not only do we have to be fast, we have to be consistent as well because you’ve only got to miss one heat and you’re back to third or even fourth.”

Toyota Genuine Parts’ Harry Bates says the competition in the ARC this year has reached a level where a near-perfect performance is required to win an ARC round.

“It’s been so close all year that it’s [a win] not going to be by a large margin,” predicted Bates.

Bates and co-driver John McCarthy have been nipping at the heels of Evans’ Skoda Fabia R5 since round two, with nothing between the rivals on the last day of the Netier National Capital Rally back in June.

“Since the Skoda was debuted in WA, I feel like every day of rallying we have become closer and closer and that’s mainly through the fact that we are developing every day with the Yaris,” Bates said.

“Whilst we started off a bit off R5 pace, we’ve been gradually eating away at the gap and it did definitely feel on day two in Canberra that the gap was insignificant, it was almost nothing.

“Going into this weekend we can definitely take some confidence from that and feel the we are starting on a reasonably even playing field.”

Despite living in Launceston, Contel Communications’ Steve Glenney has declared he has no home-ground advantage this weekend, apart from being able to sleep in his own bed.

Glenney, with co-driver Andy Sarandis, has been a standout in the 2018 ARC, finishing on the podium two of three rounds and currently sitting second in the Championship.

“I am happy with the progress of this season so far but our aim for the season remains to keep the pressure on the front runners,” Glenney explained.

“We don’t have the outright pace to win but we are hoping that we have the reliability to keep the pressure on and that’s our role because obviously we have the slower, aging car,” he says of his Subaru Impreza WRX STi.

The Subaru, which Molly Taylor drove to the 2016 CAMS Australian Rally Championship win, has had a major overhaul between rounds in a bid to reduce the overall weight of the car.

“The weight of the car is getting closer to the others and it’s becoming easier to drive in faster sections. We’re just going to do our best to get near enough and annoy them,” Glenney said.

Subaru do Motorsport’s Molly Taylor and Malcolm Read will also enjoy a home-ground advantage of sorts, with their team, Les Walkden Rallying, based in Launceston.

“From Les to the tech crew, Malcolm and I have been pummelling them for local insights, which could prove invaluable over the weekend,” Taylor said.

“We’ve got a big job to do if we’re going to work our way up from fourth in the Championship – but what better way to do it than Les’s back yard.”

In addition to the battle for the outright win, there will be healthy competition in the ARC2 field. Locals Glenney, Mark Butcher and Matt How will be on the hunt for ARC2 points, while Ben Hayes, Adam Kaplan and Kevin Raedel have selected the event as their nominated ARC2 round.

A 23-strong field will also contest round three of the Dunlop-Motul Tasmanian Rally Championship, all out to catch Championship leader Brodie Reading in his Carver Mechanical Subaru WRX STi.

Subaru Rally Tasmania kicks off on Friday evening at Inveresk with The Examiner Ceremonial Start at 6pm followed by an 820-metre Super Special Stage around the Inveresk Roundhouse.

Saturday’s heat will see competitors test themselves on the fast and flowing roads in the Diddleum Plains area before tackling the slow, tight and technical sections in the Sideling Range and Lisle State Forest.

On Sunday, competition will move to the north of Launceston and the Retreat Forest, which is known for its fast and open forestry roads.

The final stage returns to the Lisle State Forest, which will also be the longest and most demanding in the event.

The event also has received significant government support, with both Events Tasmania and the City of Launceston backing Subaru Rally Tasmania in 2018.

Visit www.rally.com.au for all the results, news and video action from Subaru Rally Tasmania this week.