Tasmania the next stop for Grove Racing

Tasmania the next stop for Grove Racing 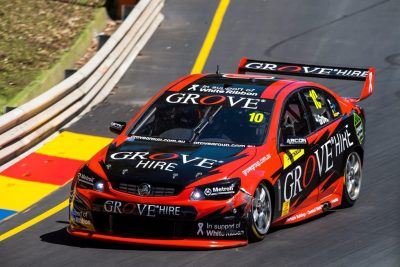 A trip across the ditch to Tasmania will be the next stop for Grove Racing as Round 2 of the Dunlop Super2 Series gets underway at Symmons Plains Raceway this weekend (April 6-8).

Second generation racer Brenton Grove is set to make his latest appearance in Super2 after debuting at the opening round on the streets of Adelaide in March.

Deeming much of the Adelaide round a ‘learning weekend’ as he adapted to the new style of racing, Grove showed promising signs making continuous improvements.

The 20-year old believes there is still plenty to come as the season really begins to unravel, with six rounds still remaining.

“I can’t wait to get back to Tassie,” said Grove.

“It’s an awesome little circuit, pretty unique compared to the tracks we race on back on the mainland.

“The event is always really well received and so it’s a cool place to head to. The action on track is always pretty close as the track is short so that will be exciting.

“As the track is quite short and there aren’t a whole lot of corners, it’s always a hard place to get right. But if you do, it’s a very rewarding place.

“The weather is something that adds another element into the weekend. It can change quite quickly and as we saw last year, it can make things very interesting.”

Climbing back behind the wheel of his ex-Craig Lowndes Holden Commodore, Grove will be returning to Symmons Plains for the first time since 2016.

It comes off the back of his Formula 4 race win when he last competed at the 2.4km, 7 turn venue in 2016, though this year he will be in vastly different machinery.

The Melbourne-based driver will be hoping to capitalise on that past track experience this weekend.

“It’s one of the few tracks we go to this year that I’ve been to before,” added Grove.

“I really enjoy the circuit and having had success there in the past makes me excited to go back.

“For sure, it’s going to be a lot harder than last time so I’m excited to go back and learn.

“You can’t really compare the two cars so there will be a bit to learn. I think just knowing the track and the undulation of the corners will make the learning experience a bit quicker.”

Opening practice for Super2 sees the green flag at 10:35 local time on Friday, with the first race on Saturday at 15:30 local time.

The action will be broadcasted Live on Fox Sports Channel 506.