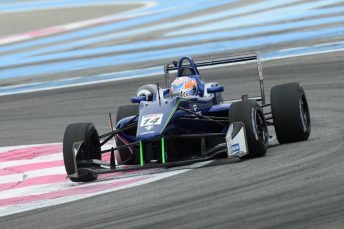 Tarun Reddy is aiming for an immediate response following a luckless weekend at Paul Ricard in round three of the EuroFormula Open this past weekend (10-11 June), with contact taking him out of race one contention and hampering his race two progress – 11th overall the fruit of his labour.

The rising Indian motorsport star only arrived on French soil at three o’clock on Friday morning, right off the back of the university exams he has been studying for alongside a comprehensive race preparation programme since the previous round at Spa.

Friday practice was a case of getting to know a circuit that was then new to the 19-year-old racer, as he and Carlin looked to dial into the Le Castellet venue. Qualifying was a close run thing, with Tarun securing a top ten berth, though just a tenth of a second shy of a top six spot, despite Reddy not being 100 per cent comfortable with the car’s setup.

Race one was over before it had begun, with contact sending Tarun out of contention at the opening turn. Race two was a process of recovery and 11th spot was as much as could have been achieved in the circumstances.

“The weekend was a fairly average one, all things considered,” said Tarun. “Because of my university commitments and examinations, I only arrived in France at three o’clock in the morning on the Friday – I was on the back foot before things had got underway as a result.

“Friday was a case of trying to get to know Paul Ricard, as it was a circuit I’d yet to visit. Because of the tyre situation on a Friday – having to run old rubber – we didn’t know where our true pace lay.

“Come qualifying, we were competitive and if I’d got a clean lap in I was looking at a top six starting position, even with the car still feeling a little outside of the window I’m comfortable with setup-wise. A row three start would have set the first race up perfectly.

“As it was, we were a touch shy and starting ninth puts you in the mix where contact can be more common and unfortunately, I was hit into turn one. It was a bit of bad luck we could have done without, but that’s motorsport.

“From then on, we struggled with pace. As a team we’ve we’ll be doing everything we can to figure out why we lacked pace on Sunday.”

Hungary is the next stop on the calendar and Tarun will be working with Carlin to ensure the best possible platform to work from at Budapest’s Hungaroring.

“We’re looking to make a bit of a leap again for Hungary. We’ve had two solid events this season and a trophy, and we’re aiming to get back to that.

“My pace is there and strong points are possible. It’s a long championship – we just go on ahead and look to the next one.”

Veloce Sports founder Rupert Svendsen-Cook added: “Paul Ricard didn’t produce the success that we aimed to achieve. Some of the misfortune was certainly out of Tarun’s hands and we can only focus on what we can control.

“Without a doubt, we need to react and get all departments firing on all cylinders for Hungary.

“With Tarun now free from university commitments, it’s a load off for him and he has more time to focus on his racing which will be a big plus.”