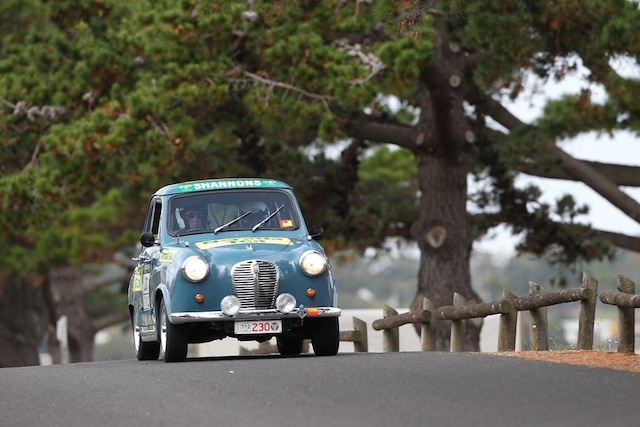 The field for this year’s Targa Tasmania Shannons Early Classic competition will bring memories flooding back for automotive enthusiasts.

Members of the public often approach competitors in the class with stories about a similar car owned by their father, grandfather or other family members.

The 1955 Austin A30 of Targa regulars Simon and Amanda Davison, from Ulverstone, is no exception, especially for fans of the late great Peter Brock. The nine-times Bathurst 1000 winner famously raced an Austin A30 in his very early career before joining the Holden Dealer Team.

“We get a lot of comments from people either telling us about an A30 their family used to own, or people who want to have a closer look at a car like Peter Brock’s first car,” Simon said.

Realising the historical significance of the Brock-A30 link, Simon and Amanda were fortunate enough to get Brock to sign one of the front mudguards of their car when he last drove in Targa Tasmania in 2006 – the year in which he was later killed in Targa West.

“As you would expect, the signature is a bit of a talking point too,” Simon said.

“I can also relate to people whose family may have owned an A30 as well, because they’ve always been part of my family too,” he said.

“There’s always been one or two in my family for as long as I can remember, so it was an obvious choice when I wanted to go rallying.”

“They’re fairly rare in Australian motorsport now, but they’ve been used in rallying and racing in England for many years,” he said.

Originally from Ballarat (Vic.), Simon and Amanda have been competing in Targa Tasmania for the past 13 years, the past nine as Tasmanians.

“We always wanted to move to Tassie and when an opportunity came up through work, we took it “ Simon said.

“I’d like to say Targa had been an influencing factor, but it wasn’t. It was totally work-related, but making it easier for us to do Targa Tasmania every year was a real bonus,” he said.

The main aim Simon and Amanda in this year’s Targa Tasmania will be the same as their past 13 attempts – to finish every stage within the maximum time for the class to qualify for a Targa plate.

Having finished 12 of their 13 Targas to date, the pair has attained their Diamond Targa plate for finishing nine events within the allocated time.

This year marks the first year of their goal to obtain a Gold-Diamond Targa plate, awarded for completing 12 events within the allocated time – something which has only been achieved to date by 20 competitors from the hundreds who have contested the event in its 24-year history.