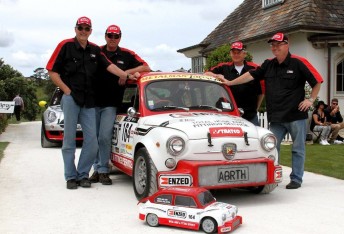 True to his word Targa New Zealand tarmac motor rally veteran Mike Lowe is putting his money where his mouth is.

After years of challenging other drivers to join him, co-driver Phil Sutton and their distinctive little Enzed-sponsored Fiat Abarth Berlina Corse 1000, in the 0-1390 cc class, the Rotorua businessman is putting up a trophy and $1000 of his own money as a further incentive ahead of this year’s 20th anniversary event.

“When I started, and even when Phil came on board in 2000, there were a whole bunch of small cars competing. There were Minis, a Sunbeam Stiletto, even an Escort 1300…a great little car. Since then though the numbers have slowly dropped off to the point where we’re often the only ones in it (the Category 0 class).

“I said at the prize-giving after last year’s event that on behalf of Enzed I would put up a perpetual trophy and that’s exactly what I’m doing,” says Lowe.

Pukekohe model-maker Paul Lyons is currently putting the finishing touches to the 1/24th scale trophy (which will look similar to the radio controlled model in the accompanying photograph) and Lowe says that he hopes it will encourage others who – like himself – relish the challenge of doing a multi-day event like the six-day Targa New Zealand in a small capacity car.

“What I’m trying to say is that while you’re welcome to, and obviously a lot of people do want to do it this way, you don’t need a Godzilla (Nissan Skyline or Nissan GT-R35) or Evo, you don’t need to spend $100,000 on a car.

“We want to promote the fact that you can do it just as well in a small, less expensive car.

“Over the 19 years we’ve been doing it we’ve had an amazing amount of fun punching well above our weight, passing Porsches and all the rest of it, and it hasn’t cost us that much at all. It’s been hard work at times, and with a smaller or older car like ours they need a lot of fiddling about with to keep running at their peak, but for us that’s what Targa is all about.”

Lowe – who when he lines up later this year will be one of only a handful of competitors who have started all 20 Targa New Zealand events – and his co-driver and two-man crew have faced all sorts of obstacles along the way, from broken crankshafts to an infamous rollover one year, but they have always got the car to the finish.

And they don’t plan stopping any time soon.

“We’re all getting older, obviously the car is 50 years old this year for a start. Yes I have thought about what we are going to do in the longer term. But right now it is all systems go for the 20th anniversary event down south.”

For the first time in its 20 year history the Targa New Zealand event will be run in the South Island this year, starting in Christchurch on Labour Day Monday (October 27) with scrutineering, documentation, drivers’ briefing, then a prologue at Mike Pero Motorsport Park (nee Ruapuna).

On Tuesday the field heads south for stages in mid-Canterbury, before the first of two overnight stays in Dunedin.

After a day full of stages in the Otago hinterland on Wednesday the field returns to Dunedin before heading south on Thursday to Invercargill – and a day’s end stage at Teretonga Park.

Competitors then spend the final day (Saturday November 01) in the Lakes County before the official finish in downtown Queenstown and the prize giving function the next day.

“Yes,” he says, “The meetings we have had with councils and venue providers have gone very well. All our functions are now sorted, the road closure process is proceeding well and our resident consultation process is almost complete. Everything is on schedule and everyone is feeling extremely positive about the event.”

That extends to entries as well with over 80 already signed up for the various competition classes and close to 80 – which will make it an event record – so far entered in the associated but non-competitive Targa Tour.

Dubbed ‘The Ultimate Road Race,’ Targa New Zealand can trace its links back to the classic open road races – the Targa Florio and the Mille Miglia – popular in Italy from the early years of the 20th Century until the 1970s.

‘Targa’ is Italian for ‘plate,’ a reference either to a car’s licence plate or to the rectangular bronze plate awarded to the winner of the Targa Florio.

The first Targa New Zealand event was held in 1995, its organiser, Mike John, having been inspired by the success of Australia’s first Targa event, Targa Tasmania, in 1992.

Since then the annual multi-day New Zealand event has been joined by several other shorter, regional events with current owner and event director Peter Martin taking the helm in 2008.

Key to the on-going success of the main and subsidiary events is the unique New Zealand landscape with its unsurpassed network of sinuous sealed roads perfect for closed Targa stages.