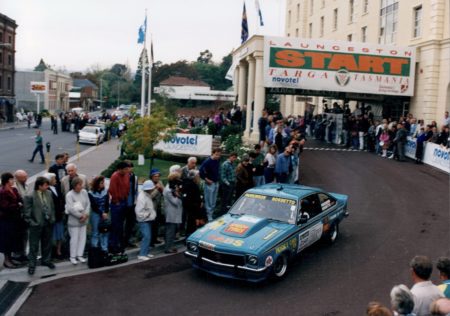 The milestone 30th edition of TARGA Tasmania for 2022 was officially launched today, marking the one-year-to-go countdown to the major anniversary event of the iconic motorsport series.

Entries are now open for the 30th anniversary running of TARGA Tasmania, which will be staged at a brand new time slot from March 8 to 13 next year, immediately following the Eight Hour day/Labour Day long weekend.

It is the first time that TARGA Tasmania will have been held during March, and will further build on the appeal of the event moving out of the traditionally cooler months of April and May.

Moving from a Tuesday to Sunday format from the normal Monday to Saturday schedule, the landmark event will expand to a record competitive distance of over 700 kilometres with a total of 2200 kilometres travelled around the island state.

It is expected that more than 400 entries across TARGA’s range of classes will see TARGA Tasmania 30 feature the largest motorsport competition field in the world.

Paying homage to the TARGA Tasmania event in 1992, the event will begin from the same location as the maiden rally in the heart of Launceston, outside the Grand Chancellor Hotel, then known as the Launceston International Hotel.

A cavalcade of motoring history will cross the start line on March 8, 2022, as the event continues to attract some of the finest motor vehicles ever made, both in the competitive rally section and the ever growing Tour, which attracts motor enthusiasts and their magnificent modern cars from leading prestige brands.

TARGA Tasmania has survived the peaks and troughs over time to become a key money-spinner for the state with a direct economic return of over $15 million that equates to over $310 million since 1992.

The impact of one of Australia’s most enduring motorsport events translates to more than 50,000 bed nights during event week.

Marking TARGA Tasmania 30 will be a return of a number of key routes that includes some iconic street stages.

“At that offical start back in 1992, no one would have been thinking about TARGA Tasmania still being around 30 years later in the 21st Century,” Perry said. “It promises something very special for all those involved and the people of Tasmania.

“The 10th and 20th anniversary events both broke all records with more than 300 cars competing, making TARGA Tasmania the largest tarmac rally in the world.

“It has been a tumultuous ten years since the 20th anniversary event culminating in the first ever cancellation last year right at the beginning of the COVID-19 outbreak.

“Time has shown it was the right call to make and the launching of our 30th event today gives everyone great hope of an exciting future ahead, for not only TARGA, but the many thousands of events trying to survive through these difficult times.

“It is very important to our communities and our culture to have events happening and whilst we all took them for granted before the pandemic, the amount of interest in TARGA Tasmania right now is unprecedented and hence we are opening entries to our keystone event today.

“It promises to be hugely successful for all the communities we visit, with many returning competitors from the early years and whilst it is too early to say if our international guests can join us in 2022, we remain hopeful that given the profile of TARGA overseas that they can come and join in on the celebrations.”

Ahead of TARGA Tasmania 30, the 29th edition of the event next month is secure. It has attracted a bumper field of entries as Tasmania gears up for the world’s most acclaimed tarmac rally from April 19-24.