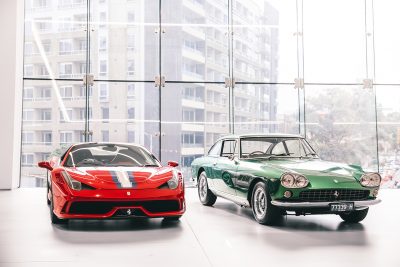 An incredible array of classic and modern Ferrari vehicles will gather in Geelong to feature in the Ferrari Tributo category which will take place across Victoria from 28 November to 2 December 2018.

First held in 1906 in Italy, Targa Florio has grown to become one of the world’s most legendary motor sport events. Originally staged in the enchanting Italian region of Sicily, the race has always started and finished in Palermo. Until now.

In 2017, the Targa Florio Australian Tribute took place for the first time ever outside of Sicily, travelling across five road stages throughout Regional Victoria. Ferrari will now re-enact the most iconic race in the world with a mix of tradition, culture and driving emotion in Australia. The event is open to the earliest Ferrari vehicles produced from 1947-1976 in the Classic category, and Ferrari cars from 1977 onwards to present day with the official introduction of the inaugural Ferrari Tributo category.

“Ferrari is thrilled to be officially celebrating this major event with our friends and fans in Melbourne and its regions,” said Herbert Appleroth, CEO, Ferrari Australasia. “The spectacular roads of Victoria will provide a stunning backdrop with which to illustrate our longstanding Targa Florio history and underline the affinity Australia has with Ferrari. We are excited to share this racing heritage with our Australian Ferraristi and encourage everyone to join us for the celebrations.”

Modern and classic Ferraris will lead the competition on the stunning roads of Regional Victoria. Over ﬁve exciting days, the Ferrari Tributo will showcase all that Regional Victoria has to offer. The event will highlight the great scenic driving roads alongside fabulous food & wine, luxury accommodation, heritage sites and classic vehicles loved by car enthusiasts around the world.

best roads and luxury lifestyle experiences. However, having Ferrari involved will also add immense value for the public and spectators and really underline the Italian heritage of our event.”

Before Formula 1 racing, the Targa Florio was the most difficult and challenging race for cars on earth, attracting the great racing car drivers and the most important international car makers, including Ferrari and its legendary founder, Enzo Ferrari. For over 100 years Targa Florio has stood as a symbol of passion for cars, luxury, elegance, and the Italian lifestyle. Today, the Targa Florio is not just the world’s most ancient road-based event, but a tribute to classic cars and beautiful scenery. It is both a motor sport event and a historical tribute to the legendary cars that participated in the original races.

It is expected that the event will attract Ferrari owners and their cars from around Australia and the greater Asia Pacific region, with an exceptional display of classic and modern Ferraris on show for the public to enjoy.