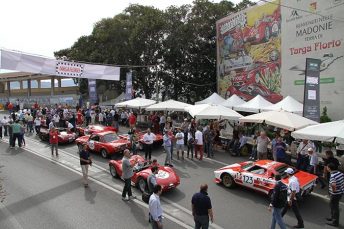 In Italian motor-racing tradition, the Targa Florio occupies a lead role. In 1907, Cavaliere Vincenzo Florio, a member of the famous noble family of Palermo entrepreneurs decided to promote Sicily’s image in the world and managed it thanks to this race which is now over 100 years old and which has become the symbol of Made in Italy in the world.

The “Targa Florio Classica” is a race in which famous drivers have always competed – from Tazio Nuvolari to Juan Manuel Fangio, Jacky Ickx, Jochen Mass, Gijs Van Lennep, Helmut Marko, Nino Vaccarella, Arturo Merzario and many others. A race in which, before they became car-makers, Enzo Ferrari and the Maserati brothers, Vincenzo Lancia and Ferry Porsche, son of the founder of the famous Stuttgart company, also took part.

Last year, during the race’s centenary celebrations, an entire parade of stars reached Palermo to pay tribute to the event. Taking part in the Classic competition in fact were well-known international names like John Elkann President of Fca, Muthar Kent Chairman of Coca Cola International, Jean Todt President of the FIA and a large number of drivers who have made Targa history.

The race is a reliability trial for vintage cars, the opening event of the Campionato Italiano Grandi Eventi (Large Event Italian Championships), which crosses Sicily along a wonderful route which also evokes the historical one. A big tourist attraction for anyone interested in exploring natural landscapes, old-town centres and archaeological sites, as well as sea coasts of extraordinary beauty. Two locations are particularly deserving of mention: Taormina and Giardini Naxos, as well as the splendid Piazza Verdi of Palermo, the historical start and finish point. Along the same route, and preceding the race by one hour is the fantastic Ferrari Tribute with several dozen vintage models of the Maranello company.

Alfa Romeo and Abarth will be the main sponsors of the event. Among the first entries, US, German, Chinese, Dutch, Czech and obviously Italian crews, out to defend their national colours. The cars are all vintage models, real gems like for example the OM-665 SSMM Zagato built in 1930, and many legendary models of the 50s and 60s which have made the history of international car racing.