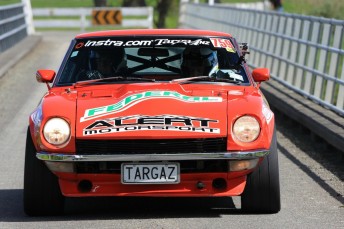 When the 120 competing cars line up to start this year’s 20th anniversary Targa tarmac motor rally in the South Island the majority will do so on a set of Federal tyres.

Federal was a new name on the local motorsport scene when Targa New Zealand owner and event director Peter Martin signed a control tyre deal with the Taiwanese company three years ago. But now it is well established scene because of the Targa link.

One or two entrants will have dispensations because their cars – usually older models – have odd wheel sizes, but both Martin, and Federal Motorsport tyre distributor Allan Lewis of Auckland’s Alert Motorsport, are happy with the uptake.

” Because a lot of our regular competitors had built up quite a stockpile of the old control tyre we had a mix of the old and new the first and second year. But once they bought their first set of Federals, and found out how good they were, the balance started tipping the other way to the point now where most will be on them this year, ” says Martin.

“It’s a real partnership,” says Lewis, “they’ve been supporting us as the event’s control tyre supplier and we’ve been supporting them in terms of technical information and feedback on how the tyres perform under real-world conditions. ”

A multi-day, road-based event like a Targa tarmac motor rally really puts a road-legal competition tyre through its paces, but Lewis says the unique construction of Federal’s FZ-201 semi-slick means they not only offer exceptional grip, they also wear extremely well.

“With other brands of DOT (road-legal) tyres, the better the grip, the quicker they wear, and that’s been a bit of a bone of contention in past Targas. But the Federals are different. They’ve got a very stiff sidewall and don’t overheat so they don’t go off, they just get better and better.”

Federal also offers most popular tyre sizes in two rubber compounds, medium and soft. Initially, most competitors went for the medium compound, expecting the softer one to wear quicker and therefore need to be replaced sooner.

However those who did go for the soft compound found that though they benefitted from the extra grip the softer compound offered, the wear rate was the same as a typical medium compound tyre.

Lewis believes that this superior grip and wear rate (across both compounds) will come into its own in the South Island.

“People have been telling me that the chip-seal down there is really hard on tyres, but from what we’re found out first hand, ourselves, I think the Federals will be fine, particularly on the longer stages where I think they will really come into their own.”

Though a relatively new name here, Taiwan’s Federal Corporation was founded in 1954 and worked closely with leading Japanese tyre manufacturers from 1960 before launching the Federal Tyres brand in 1987.

Since then the company has established a strong network of overseas distributors with more than 100 national and regional representatives in over 70 countries.

To find out more about Federal’s range of motorsport tyres contact Alert Motorsport on 0-9-970 9560, visit the showroom and tyre shop at 5/4 Clemow Drive Mt Wellington, or head to the company’s website at www.alertmotorsport.com