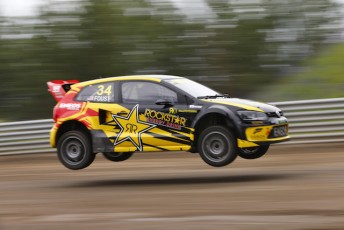 MEDIA RELEASE: American television and motorsport star Tanner Foust will join the Volkswagen RX Sweden team for two rounds of the FIA World Rallycross Championship this season, starting at Lydden Hill in the UK later this month [May 27 – 29].

The winner of the Finnish round of World RX in 2014 will also join the team for the 11th round of the championship at the Estering in Germany later this year [October 14 – 16].

Foust competed in a Volkswagen Polo RX on four occasions in World RX 2015, and finished third at the Canadian round of the championship at Trois-Rivieres. He also made the final and finished fifth at Barcelona in Spain.

He will race this season alongside regular drivers, Johan Kristofferson and Anton Marklund. “I’m looking forward to returning to World RX with Rockstar Energy Drink and the Volkswagen RX Sweden team,” said Foust.

“It’s a professional organisation with great race cars. It’s a new team made up of very experienced people. With the speed the Volkswagen Polo RXs have shown so far this season I’m excited to get my hands on one. I feel very lucky to be able to compete at Lydden Hill again this year. As the birthplace of rallycross, the track has a lot of history and I jumped at the chance to add the World RX of Great Britain to my competition schedule.”

Foust’s first appearance of the season will mark his seventh consecutive appearance at Lydden Hill. “It will be very nice to have Tanner back with us in the Volkswagen Polo RX. He showed very good pace when he drove with us last season. Lydden Hill is somewhere I know he likes and he has won there a couple of times in the past,” said Volkswagen RX Sweden Team Principal, Michael Schneider.

“He fits in with the team very well and it will be interesting to see how he finds all the developments and hard work we have done for this season. It will be great to see him competing against Ken Block, who he has raced against in America, along with Sebastien Loeb and all the other high profile names.”