Tan showcases raw pace again as he closes in on podium

Tan showcases raw pace again as he closes in on podium 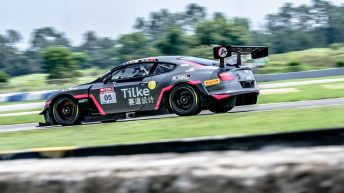 Weiron Tan proved that the podium is within reach in the latest outing of the fiercely-disputed China GT Championship at Zhuhai International Circuit last weekend, with an impressive performance around a track that was far from ideally suited to his Bentley Continental GT3.

After finding himself out-of-luck at the same circuit three weeks earlier, Tan returned to Zhuhai eager to continue his eye-catching rate of progress with Absolute Racing in what is his maiden full sportscar campaign.

Picking up from where he had left off, the 22-year-old Chinese ace – working in tandem with Korean team-mate Andrew Kim – snared pole position for both contests amongst the 12 high-calibre GT3 class contenders, meaning the #05 crew have claimed the top spot on the starting grid for half of the rounds in 2017 to-date.

With the nature of Zhuhai International Circuit playing more to the strengths of some of Bentley’s rivals, however, Tan and Kim struggled to maintain that same level of pace in the races, battling hard before ultimately finding themselves forced to give best.

A gritty effort nonetheless earned the pair fifth place at the chequered flag in the first encounter and fourth in the next, just a handful of seconds adrift of victory after an hour’s flat-out competition. Notwithstanding the obvious disappointment of having come so close only to miss out by the narrowest of margins, the Williams Harfield Sports Group protégé and erstwhile Caterham F1 Academy member is bullish about his prospects for the remainder of the campaign, beginning in Shanghai on 8-10 September.

“I was actually pretty pleased with the weekend, even though we didn’t get the results we deserved,” reflected Tan. “We secured a double pole position to make it three in a row, and with this being my rookie season in GT3, that’s a pretty big achievement for me.

“We knew we had the speed, but we also knew that winning in Zhuhai wouldn’t be easy for the Bentley as the circuit just doesn’t suit our car over longer runs – it’s too small, our brakes overheat and the tyres degrade too quickly. We’re good for the first few laps, but after that it’s all about trying to hang on. It was especially tricky towards the end of stints.

“Saying all that, I thought I executed the weekend very well, as did Andrew and the whole team. Big thanks to Absolute Racing for once again putting in 100 per cent commitment. We should be a lot stronger in Shanghai, so I’m really looking forward to challenging for our first win this season!”