Tales from the paddock – Robert Wickens: “Fifty years of AMG is obviously a big deal, and I’m happy to represent that on my car”

Tales from the paddock – Robert Wickens: “Fifty years of AMG is obviously a big deal, and I’m happy to represent that on my car” 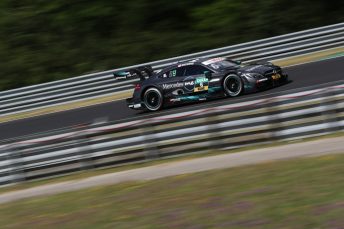 Next stop, Nuremberg – the race on the Norisring is generally considered to be the highlight of the DTM season. But first, Robert Wickens paid a visit to Road America…

This is what happened: Results & facts

Stat-Attack – Baku: For the fifth time this season, Saturday’s qualifying was dominated by pole-sitter Lewis Hamilton. Having now claimed his 66th Formula 1 pole and his seventh in the last ten races, he moves up to second place on the all-time leader board – only two poles behind record world championship winner Michael Schumacher. On Sunday, Lewis missed out on victory because of a loose headrest, but Valtteri staged a magnificent charge through the field. Aided by the two safety car deployments and the interruption to the race, he worked his way up from last place and one lap down to take the flag in P2. In a spectacular photo finish, he crossed the line only one tenth ahead of podium debutant Lance Stroll.

Special birthday greetings: For the past 50 years, the name of Mercedes-AMG has stood for performance, perfection and passion. Robert Wickens will be playing his part in the anniversary celebrations by sporting a special paint job during the upcoming race weekend at the Norisring in Nuremberg. The Mercedes-AMG C 63 DTM driven by the Canadian will display a birthday greeting to the manufacturer. Wickens and the Mercedes-AMG Motorsport DTM Team are not the only celebrities offering their congratulations on this half-century. In mid-June, the rock band Linkin Park gave an anniversary concert in honour of AMG at the Mercedes-Benz Arena in Berlin. Incidentally, the musicians are not unknown on the motorsport scene – they helped to design the livery for a Mercedes-AMG GT3 competing in last year’s 24-hour race at Spa-Francorchamps.

Double and treble: The Mercedes-AMG customer racing team AKKA ASP celebrated the double and the treble in the Blancpain GT Sports Club. The team fielding a Mercedes-AMG GT3 took first, second and third place in both the qualifying race and the main race on the Circuit Paul Ricard. The Frenchman Anthony Pons had a perfect weekend: he secured pole position for both races and finished first both times in the number 72 Mercedes-AMG GT3. He was followed over the line by his two team-mates, Daniele Perfetti (SUI, #89) and Maurice Ricci (FRA, #87) in P2 and P3 respectively. Anthony Pons is on 76 points ahead of second-placed Daniele Perfetti on 53 and looks all set to take the title. The next fixture on the GT Sports Club calendar is the weekend of the 24 Hours of Spa (27th – 30th July).

Victory in the Blancpain GT Series Asia: GruppeM Racing secured victory in the second race of the weekend at the Suzuka International Racing Course. Hunter Abbott (GBR) partnered by Maximilian Götz (GER), who was making his debut in the Blancpain GT Series Asia as a substitute, started from fifth place. In difficult conditions on a wet track, Götz made spectacular progress through the field at the start of the race, quickly moving up to second place. The duo seized the lead during the mandatory pit stop and change of drivers. Hunter Abbott then held on to first place throughout the second stint and even managed to pull out a comfortable lead. The Englishman leads the championship standings by eight points at the halfway stage after six out of twelve races. GruppeM Racing likewise lead the team championship by a clear 42 points.

Podium in class and two Top Ten results: AKKA ASP took third place in the Pro-AM class at last weekend’s Blancpain GT Series Endurance Cup on the Circuit Paul Ricard. The trio of Nico Bastian (GER), Jean-Luc Beaubelique (FRA) and Jules Gounon (FRA) shared the cockpit of the number 87 Mercedes-AMG GT3. The best Mercedes-AMG GT3 in the general classification was the number 88 AKKA ASP which finished fourth. Renger van der Zande (NED), Daniel Juncadella (ESP) and Felix Serrales (PUR) fought their way forward from ninth on the grid over the course of the six-hour race. The second Top Ten placement went to the number 90 AKKA ASP car driven by Edoardo Mortara (ITA), Michael Meadows (GBR) and Raffaelle Marciello (ITA) who took the chequered flag in tenth place. The Mercedes-AMG teams might have had an even better result to report: the number 4 BLACK FALCON driven by Yelmer Buurman (NED), Adam Christodoulou (GBR) and Luca Stolz (GER) had secured pole position for the race and seemed to be cruising to victory but were forced to retire shortly before the end of the race due to a technical failure.

The SLS AMG GT3 chalks up its 175th win in more than 1,000 races: The SLS AMG GT3 registered yet another victory in its illustrious history when Customer Racing Team Drivex School came first in the Campeonato de España at the Circuito del Jarama. Starting from pole position, the duo of Miguel Ángel de Castro and Antonio Escámez (both ESP) drove a dominant lights-to-flag victory in the number 105 SLS AMG GT3. The racing car from Affalterbach has now recorded 175 wins in the general classification of just over 1,000 races since making its debut in 2011. And this will surely not be the last…

Two podiums in class in the Pirelli World Challenge: Timothy Pappas (USA) finished third in the general classification in both of the 50-minute Road America races. Driving the number 54 Mercedes-AMG GT3 entered by BLACK SWAN RACING, he secured his fourth podium appearance in the current Pirelli World Challenge season. Ryan Dalziel in the number 2 Mercedes-AMG GT3 entered by CRP Racing finished ninth in the second race to secure a further Top Ten placement for the brand.

Q: Last weekend, you drove in an IndyCar free practice session for the first time in your career. How did that come about?

Robert Wickens: I planned on having a relaxing weekend at home, but on Thursday afternoon I got a call from Schmidt Peterson Motorsports which is the team that we did the ride swap with involving James Hinchcliffe back in April. And they asked if I could go to Road America and fill in for Mikhail Aleshin who had immigration issues. Fortunately, Toto was happy for me to do it and I was able to jump on a plane and get to Wisconsin. We didn’t get to the hotel until about 10pm on Thursday, and Free Practice 1 was on Friday morning very early. It took some getting used to. The practice itself was fun. The track was really good. It would be amazing to have a DTM race there one day. I definitely wanted to do the full weekend, but the full-time driver got his immigration stuff sorted and he made it to the race track by Friday night. My duties were finished, but it was still a really fun Friday

Q: Having now sampled IndyCar racing, is that something you’d like to move into?

Robert Wickens: Not really, to be honest. I just want to race cars. That’s the main thing. I have no urge to leave the DTM at the moment. Everything is going well, and I’m really happy with Mercedes.

Q: At the Norisring, you’ll be sporting a new livery. Do you think it’s OK to be driving a car that keeps changing its appearance? And what are your expectations for this weekend?

Robert Wickens: I think I said it already with the VfB Stuttgart livery, when I’m inside the car I don’t see the difference. But I think it’s cool as long as the fans like it. Fifty years of AMG is obviously a big deal, and I’m happy to represent that on my car this weekend. I don’t really have a lot of expectations. The DTM is so competitive. I was very fortunate to have had very good results at Norisring in the years past, but that doesn’t mean that we’re going to have the same thing again. We have to work very hard. It’s been a good track for Mercedes in the last couple of years but we don’t know whether we still have an advantage or not. The team around me has done a great job all year, although our results have been a little bit up and down. It would be great to score some big points this weekend.