Tales from the paddock – Paul Di Resta: ‘The more cars in the field, the better’

Tales from the paddock – Paul Di Resta: ‘The more cars in the field, the better’ 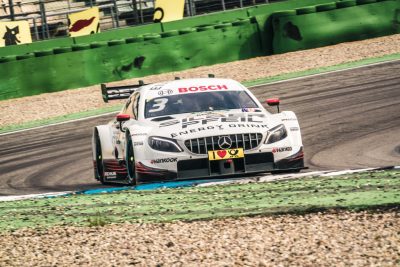 The drivers are in the starting blocks for the 2018 DTM season: Paul Di Resta tells us what he will be up to between now and the first race weekend and what he thinks of the planned farewell outing for Mattias Ekström.

Baku, here we come: The Baku City Circuit is one of the newer venues on the Formula 1 racing calendar. This season’s visit to the metropolis on the Caspian Sea will be only the third such occasion in the history of the series. The race premiered in 2016 as the European Grand Prix, but from 2017 onwards it has been designated the Azerbaijan Grand Prix. Last year, this GP fixture was held in June, but for 2018, it has been moved to the end of April. The team travels to Baku as leader in the Constructors’ World Championship, hoping to score a first victory of the season. The record of the team in Baku so far is two pole positions, two podium finishes and one victory. That win went to Nico Rosberg when the series made its debut in Azerbaijan in 2016. Last year, Valtteri Bottas was runner-up in a photo finish ahead of Lance Stroll.

Successful weekend for Mercedes-AMG Customer Racing: Last weekend, Monza hosted the second round of the Blancpain GT Series. There were podium finishes in the general classification of the three-hour race for no fewer than two of the Mercedes-AMG GT3s. STRAKKA Racing (#43) advanced from fifth on the grid to claim the runner-up spot while the number 4 Mercedes-AMG Team BLACK FALCON improved from sixth on the grid to third overall. In the first Endurance Cup race of the season, there was yet another double podium in the Silver Cup secured by AKKA ASP (#90, P2) and BLACK FALCON (#6, P3). And last but not least, the number 89 car entered by AKKA ASP also won the AM Cup.

In the Navarra 12 Hours, the number 85 PROsport Performance Mercedes-AMG GT3 finished third overall. There were two more P3 finishes in their respective classes for Swiss Team (#15, A6-Am) and IDEC Sport Racing (#17, A6-Pro). The reigning champions of the 24H Series, Hofor Racing, started from pole position but ultimately had to settle for seventh place (P4 in the Pro-Am class). The Mercedes-AMG GT4 entered by QSR Racing School took first place in the GT4 class (P16 in the general).

In the Spezial Tourenwagen Trophy at the Hockenheimring, Mario Hirsch got his season off to a great start. In his first outing at the wheel of the number 20 Mercedes-AMG GT3, he registered a podium in class in Race 1 (P5 overall) and then finished outright second in Race 2.

Paul, the start of the season is rapidly approaching. What will the remaining one and a half weeks before Hockenheim be like for you?

Paul Di Resta: Quite normal, really. The preparations will continue until Monday. Our complete focus is on the performance of the car. After the tests at Hockenheim, there was still a lot to do. Now we are keen to find out where exactly we stand relative to our opponents. The car was good in the tests, and I hope we will make a decent start to the season.

This year, your preparations for the season have looked a bit different, as you have been competing in other series in the meantime. Could the additional race practice prove to be an advantage for you?

Paul Di Resta: I didn’t drive a DTM car in the whole period from October to April, so I am glad that I was at least able to compete in a few other races. As a driver, it is always nice to be in the cockpit of a racing car. Unfortunately, the testing opportunities in the DTM are severely restricted by the regulations. That’s why I’ve tried to make the most of the situation.

Mattias Ekström will be signing off with two farewell races at Hockenheim. What do you think of that idea?

Paul Di Resta: It’s always great when someone like Mattias is in the starting line-up. He has been an important part of the DTM for a long time. In my opinion, it’s a good thing for the championship. As long as a guest starter conducts himself properly and there are no political considerations in the background, that’s fine. The more cars in the field, the better. It puts a lot of pressure on him, because he’s coming back without the benefit of having tested and he’s only driving for one race weekend. But that won’t change anything for me. My objective going into a race weekend is always to beat everyone else – whether it’s 17 cars or 18.