Tales from the paddock – Maximilian Buhk: “We intend to wrap up the championship”

Tales from the paddock – Maximilian Buhk: “We intend to wrap up the championship” 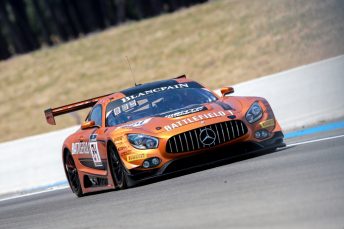 While Formula 1 is staging two classics within a week – namely Spa-Francorchamps and Monza – Maximilian Buhk’s focus is firmly on the battle for the Blancpain GT Series Sprint Cup title.

Spa records: Lewis Hamilton could hardly have wished for a better start to the second half of the season after the summer break. “It’s amazing to come back into the season and start on the right foot,” said Lewis, who had already made headlines on Saturday. On the eleventh weekend of the season, he not only secured his seventh pole of the campaign but also set a new lap record of 1:42.563 minutes. Even more important, though, was qualifying on pole, the 68th time he had done so in his career, which puts him level with the legendary Michael Schumacher on the all-time leaderboard. “It’s crazy to think that in 1996, when I was eleven years old, I came here to watch Michael – and now I’ve equalled his record,” added Lewis. “I’m honoured to be up there with him now.”

200th Grand Prix: The matching of Schumacher’s pole tally was not the only milestone that Lewis would reach this weekend. The three-time world champion was contesting his 200th Formula 1 race in Sunday’s Belgian Grand Prix, and went on to secure the victory in style. It was his 58th success in the premier class, his third on the circuit at Spa-Francorchamps in the Ardennes forest and his fifth of the current season. He has had more wins than any other driver this year. Here’s a curious fact – no driver has so far managed to win two races in a row this season.

Class victory and thrills galore in the Blancpain GT Series Sprint Cup: Three weeks before the Sprint Cup finale on the famous Nürburgring circuit (15th – 17th September), the Mercedes AMG HTP Motorsport pairing of Maximilian Buhk (GER) and Franck Perera (FRA) played their part in an exciting Blancpain GT Series Sprint Cup race weekend at the Hungaroring (HUN). Starting the qualifying race from a promising position on the second row of the grid, Buhk in the number 84 Mercedes-AMG GT3 was involved in a gripping duel for third position. After the driver change, Perera instantly picked up where Buhk had left off. The Frenchman repeatedly pushed forward but ultimately had to settle for fourth place, beaten in the last few metres by a slender margin of four tenths of a second. By subsequently finishing sixth in the main race, the duo nonetheless scored valuable championship points. Now on 60 points, four ahead of their closest pursuers, Buhk and Perera have reasserted their lead in the Sprint Cup driver’s championship ahead of the final race in the Eifel forest.

Meanwhile, Jules Szymkowiak (NED) and Fabian Schiller (GER) were also having immense fun on their visit to Budapest. The two HTP Motorsport juniors clearly relished their drive in the Mercedes AMG GT3, lifting the Silver Cup in both the qualifying race (P14 overall) and the main race (P8 overall). As a result, the duo have already clinched the drivers’ and team Silver Cup in the 2017 Blancpain GT Series Sprint Cup for HTP Motorsport, with the final weekend at the Nürburgring still to come.

Pons takes Blancpain GT Sports Club drivers’ title ahead of time: The Hungaroring also proved to be a happy hunting ground for Anthony Pons (FRA) who drives for AKKA ASP. Pons had arrived in Hungary with a points tally nearly twice as great as his nearest pursuer. No wonder the Frenchman in the Mercedes-AMG GT3 looked so magisterial going into the penultimate fixture of the season. With temperatures at the track exceeding 30°C, Pons kept his cool. Even a penalty in the first race and a spin in the second were unable to knock the Frenchman off his stride. The Mercedes-AMG GT3 went on to finish sixth in the qualifying race and fifth in the main race. With the resultant points haul, it is now clear that no-one can catch Pons in the grand finale to the season in Barcelona (30th September – 1st October) and that the title is assured. It also means that the 2017 GT Sports Club Champion is a Mercedes-AMG GT3 driver.

Clever strategy secures Super GT victory for LEON RACING at Suzuka: “Clear the track, here we come.” That seems to have been the idea behind LEON RACING’s dash to victory on the sixth race weekend of the Super GT season at Suzuka (JPN). After only a single lap, the Mercedes-AMG GT3 returned to the pits where Naoya Gamou took over from team-mate Haruki Kurosawa (both JPN). An unconventional but effective move – with the early driver change, the team had an open track in front of them to roll up the field from behind. On a four-stop strategy, the number 65 Mercedes-AMG GT3 continued to make up ground, culminating in a thrilling wheel-to-wheel battle with the previous race leader. On Lap 150 came the decisive overtaking manoeuvre, after which LEON RACING were never going to surrender a maiden series victory. Furthermore, Gamou and Kurosawa moved to the top of the driver’s championship ahead of the long season break which lasts until the beginning of October. Two points behind in second place are the GOODSMILE RACING duo of Nobuteru Taniguchi and Tatsuya Kataoka (both JPN), also in a Mercedes-AMG GT3.

Mercedes-AMG take over at the top of the IMSA GTD constructors’ championship: Ben Keating (USA) was able to participate in the first free practice session before Hurricane Harvey forced him to pull out of the eleventh race of the 2017 IMSA WeatherTech SportsCar Championship at the Virginia Raceway. The Texan hurried home to battle the storm coming in over the coast of the Lone Star State. Stepping in at short notice to partner Keating’s Riley Motorsports team-mate Jeroen Bleekemolen (NED) in the Mercedes-AMG GT3 was Trent Hindman (USA). And the result after two hours and 40 minutes of racing time was highly respectable for the improvised partnership – a P3 in the GTD class. The points gained in Virginia have taken Mercedes-AMG to the top of the GTD classification with two race events remaining. The penultimate race of the season will be contested on the weekend of 21st – 24th September at Laguna Seca (USA).

Maximilian, at the Hungaroring, you and your team-mate Franck Perera narrowly missed out on the podium in the qualifying race. In the end, though, you scored enough points to assert your lead in the Blancpain GT Series Sprint Cup. How would you sum up the race weekend?

Maximilian Buhk: Firstly, we managed to qualify in the Top Three, which was a positive. Unfortunately, I got caught napping at the start of the first race, but thanks to our strategy, we ultimately finished fourth. In the main race on Sunday, we then got off to a great start, moving up from fourth place to third. On the pit stop, though, we unfortunately lost some time, which cost us a podium spot. But with our Mercedes-AMG GT3, we had a very fast car in that race, one which would have been good enough to get us onto the podium. We’re obviously delighted to be top of the Sprint Cup drivers’ championship standings and will be going into the final weekend fully motivated.

That takes place in mid-September at the Nürburgring. What are your expectations for the race weekend?

Maximilian Buhk: The car that is out ahead at the end of the Nürburgring weekend is the one that will win the championship. In the Sprint class, the teams at the top of the table are bunched so close together that it could be almost anyone from the Top Six. This will obviously make the racing at the Nürburgring extremely exciting for the fans. Our target for the Nürburgring is unambiguous: we intend to wrap up the title. After that, we’d like to win the Endurance Cup and the overall championship on the final weekend in Barcelona. With a deficit of 28 points on the leaders in the championship, that’s going to be an extremely tough call, but who knows, maybe we can still do it.

What preparations are you making for the decisive phase of the season?

Maximilian Buhk: No special preparations as such. We know what our objective is and what we need to do to achieve it. We have all the prerequisites for this, not least with our perfectly set-up cars, but also with our knowledge of the opposition and the special characteristics of the circuit. As for me personally, I’m off on a short break to recharge my batteries. I’ll be going through my training routine before the tension starts to build up ahead of the races at the Nürburgring and before we hammer out the final tactical points with the team.