Tales from the paddock – Maro Engel: “The FIA GT World Cup is at stake, and of course, we intend to win”

Tales from the paddock – Maro Engel: “The FIA GT World Cup is at stake, and of course, we intend to win” 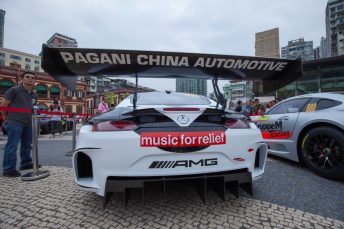 Before the Abu Dhabi Grand Prix rounds off the main racing season, there is one more motorsport classic on the calendar, namely the Macau Grand Prix.

Stat Attack – Brazil: The 2017 Formula 1 season is drawing to a close. Brazil hosted the penultimate race weekend of the season, which ended with the 25th podium finish of the year for Mercedes-AMG Power. Valtteri Bottas started the race from pole – the third time he has done so in his career – and recorded his twelfth podium for the Silver Arrows. Lewis Hamilton, meanwhile, had to stage a furious pursuit. The four-time and newly crowned World Champion was obliged to start from the pit lane after crashing out in qualifying, yet at the end of the 71 race laps, he narrowly missed out on a podium in fourth place, crossing the finish line a mere 5.4 seconds behind the winner. The 68th Formula 1 season ends in one and a half weeks’ time with the Abu Dhabi Grand Prix (24th – 26th November) on the Yas Marina Circuit.

Historic moment: Welcome to the Super GT in Japan! With Lexus and Nissan having put in some demo laps during the DTM grand finale at Hockenheim, it behoved the three DTM manufacturers to return the compliment in the Land of the Rising Sun at the finale of the Japanese racing series. In front of 50,000 spectators, the three DTM cars performed demo laps of the Twin Ring Motegi circuit on Saturday and Sunday. At the wheel of the Mercedes-AMG C 63 DTM was Maro Engel. The highlight of the weekend was the parade of the three DTM cars behind the safety car during the formation lap for Sunday’s race.

Culmination of the Formula 3 season in Macau: The prestigious Macau Grand Prix will take place on the legendary Guia street circuit for the 64th time this year. The FIA F3 World Cup, which has been won three times over the past four years by the driver of a Mercedes-powered car (2013: Alex Lynn, 2014/2015: Felix Rosenqvist), is traditionally contested alongside the FIA GT World Cup. This year’s line-up will include no fewer than six cars powered by the Mercedes-AMG Formula 3 engine. Four of them are being entered by the SJM Theodore Racing by Prema team. Making up the squad are Maximilian Günther, Callum Ilott, Mick Schumacher and Guan Yu Zhou. The two Van Amersfoort Racing drivers are Ralf Aron and Pedro Piquet.

Preview of the FIA GT Macau World Cup: After the victories of 2014 and 2015 and last year’s third place, Mercedes-AMG Motorsport have one clear objective for the 2017 FIA GT World Cup Macau – to bring the trophy back to Affalterbach. There is a correspondingly strong line-up of drivers and teams, with four Mercedes-AMG GT3s vying for honours on the 6.1km Guia Circuit in the Chinese city of Macau (16th – 19th November). And there is no doubting the calibre of the drivers either, with Maro Engel (GER), Daniel Juncadella (ESP), Edoardo Mortara (ITA) and Raffaele Marciello (ITA) occupying the four cockpits. There are two teams involved: Mercedes-AMG Team GruppeM Racing and Mercedes-AMG Team Driving Academy, each entering two cars. Both outfits are receiving extensive support from HWA AG. An especially eye-catching feature will be the livery for one of the Mercedes-AMG GT3s designed by and for the US rock band Linkin Park.

Endurance title secured down under: On the concluding weekend of the Australian Endurance Championship, Peter Hackett and Dominic Storey tackled the Highlands 501 in a calm and collected manner to ultimately achieve the desired outcome. The Australian-New Zealand duo in the number 63 Mercedes-AMG GT3 entered by Autex Eggleston Motorsport started the race at Cromwell in New Zealand from pole position but from then on avoided any risks and were content to finish sixth, scoring enough points in the process to wrap up the 2017 Australian Endurance Championship. The race win itself went to another Mercedes-AMG GT3, this time entered by WM Waste Management / Scott Taylor Motorsport and driven by Max Twigg and Tony D’Alberto.

Championship victories in Japan and Italy: Enjoying an equal measure of success in the Japanese Super GT were Goodsmile Racing. Tatsuya Kataoka and Nobuteru Taniguchi in the number 4 Mercedes-AMG GT3 started the last race of the campaign from pole position. In their case, a third-place finish was also enough for them to consolidate their position at the top and come away with the championship trophy. Once again, it was another Mercedes-AMG GT3 that took the race win at the end of the 53 laps, this time entered by LEON RACING. Also celebrating a successful weekend were MDC – Sports UG. The Swiss outfit’s number 3 Mercedes-AMG GT3 took P6 in the six-hour race in Rome to clinch the 2017 Italian Endurance Championship title.

Podium finish in the 24H race in the USA: In the final race of the 2017 24H Series, BLACK FALCON took second place and finished the event at the Circuit of The Americas in Texas (USA) as the best-placed team in a Mercedes-AMG GT3. Hofor Racing powered by Car Collection had already successfully defended their 2016 24H Series title win on the Portimao weekend in late August. However, the Texas-based outfit were unable to shine in the Continents Championship after being forced to retire from the race. “The DNF was of course regrettable,” said team manager Michael Kroll. “But we can still look back on a successful season after closing down the championship so early. We’re now going to make good use of the short winter break to be ready to start all over again in the first fixture of next season in Dubai.”

Maro, the FIA GT World Cup Macau (16th -19th November) is fast approaching. What do you hope to achieve in Macau?

Maro Engel: I’m really looking forward to lining up for Mercedes-AMG again in Macau. The FIA GT World Cup is always the highlight of my racing calendar, for sure. I’ve built up a very special relationship with Macau following my wins there in 2014 and 2015 and third place last year. Plus, driving the Mercedes-AMG GT3 in Macau is just amazing. As in previous years, the field of entrants is of an extremely high calibre, but I’ve got a great team behind me and the Mercedes-AMG GT3 is a fantastic car. The FIA GT World Cup is at stake, and of course, we intend to win. Unfortunately, we saw someone else take the title last year, so we’re now even more determined, all of us, to go all-out and bring the title back to Affalterbach.

What makes Macau so special?

Maro Engel: The atmosphere is simply awesome. The circuit is on a peninsula and surrounded by casinos. It’s not just a race, it’s THE event of the year to round off the motor racing season, and the racetrack itself is unique. It’s a street circuit that has everything. Top speed is just under 300 km/h. The fastest corner is taken at up to 250 km/h and what’s probably the slowest turn in the whole of motorsport, the Melco Hairpin, at only 30 km/h. The track varies in width from very wide on the lower, fast section to extremely narrow with high crash barriers on the upper, hilly part. But the track’s rhythm is never interrupted. It all serves to make this racetrack so very special. Overtaking is extremely difficult and only possible on the lower section. As a result, qualifying and getting away off the line are extremely important. Nevertheless, the races are usually very spectacular, as we saw last year.

Your Mercedes-AMG GT3 will carry Linkin Park’s logo in Macau and stickers for the 320 ChangeDirection Foundation and Music for Relief. Why’s that?

Maro Engel: I know the guys from Linkin Park and really appreciate what they’re trying to do, so it’s a huge honour for me to be able to race in Macau, displaying the band’s logo, especially as it’s for a good cause. Music for Relief is the band’s aid organisation, and the 320 ChangeDirection Foundation was set up by Talinda Bennington to change the culture of mental health. She’s the wife of Linkin Park’s bandleader, who killed himself. We’re very pleased to give Linkin Park and Talinda a platform in Macau to draw attention to their good causes.