Tales from the paddock – Lucas Auer: “I live and breathe Austria”

Tales from the paddock – Lucas Auer: “I live and breathe Austria” 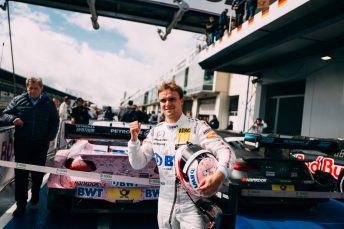 Looking forward to a home race: Next weekend, as the DTM title chase really hots up, Lucas Auer will have the full backing of his home crowd

Stat-Attack – Singapore: The Singapore Grand Prix has been one of the standout fixtures on the Formula 1 race calendar since making its debut in the 2008 season. In the tenth running of the event last weekend, something unusual happened: the first rain-affected night race in the history of Formula 1. Although the Silver Arrows have an ambivalent relationship with the tricky Marina Bay Street Circuit, Sunday was a day of celebration for the team, as Lewis Hamilton ended a dramatic race by clinching his 60th GP victory, his third on this track and his seventh of the 2017 campaign. Lewis also clocked the fastest race lap for the seventh time this year with a time of 1:45.008 minutes. Valtteri Bottas made it a double podium for Mercedes with third place – his best race result in Singapore and his tenth Top Three finish of the season. It was GP win number 73 for the Silver Arrows, their ninth of 2017 and their third on the Singapore street circuit. But the team was not only fast out on the track: the pit crew performed the two fastest stops of the race, sending Lewis on his way in 2.27 seconds and Valtteri in 2.40 seconds. This was the third race weekend in succession that the team has carried out the fastest pit stop.

Onwards to Spielberg: Since 2011, Spielberg has been hosting the DTM on an annual basis. In earlier years (2001 – 2003), the series was contested on the old A1 Ring. Mercedes-AMG Motorsport can look back on three DTM victories in the Austrian Alps. Bernd Schneider won the debut race on the Formula 1 circuit in 2001. In the two subsequent years, Marcel Fässler lifted the winner’s trophy on behalf of the brand with the three-pointed star. Last year, Robert Wickens set the fastest race lap in the Sunday race at Spielberg. The Canadian came within 0.004 seconds of equalling the track record of 1:23.442 minutes.

ADAC GT Masters – Asch keeps alive title chances in the Mercedes-AMG GT3: With his retrospective victory in Sunday’s race at the Sachsenring, Sebastian Asch (GER) of BWT Mücke Motorsport team has kept alive his chances of winning the ADAC GT Masters. He is in third place in the Mercedes-AMG GT3 with a 14-point deficit on the front-runner in the run-up to the season finale at the Hockenheimring (22nd – 24th October). Initially, Asch and his team-mate Edoardo Mortara (ITA) had booked P3 in the second race. However, the technical marshals disqualified higher finishers Zakspeed, because their racing cars did not conform to GT3 homologation. Patrick Assenheimer and Maximilian Götz (both GER) from Mercedes AMG Team HTP Motorsport also moved up as a result and were classified second in the second race. Mercedes-AMG team HTP Motorsport had already had a successful start to the race weekend with Indy Dontje (NED) and Marvin Kirchhöfer (GER) with their original second place overall at the Sachsenring.

HTP Motorsport youngsters with another strong showing in the Blancpain GT Series: Fabian Schiller (GER) and Jules Szymkowiak (NED) demonstrated their skill once again at the Nürburgring with two class wins (P9 and P6 overall). With this result, the two youngsters of HTP Motorsport tightened their grip on the Silver Cup championship which was already in the bag. The weekend started with success in the qualifying race for Maximilian Buhk (GER) and Franck Perera (FRA), a success which also meant the 50th win overall for a Mercedes-AMG GT3. Unfortunately, a retirement while lying in second place in the main race ended the dreams of both Mercedes-AMG Team HTP Motorsport drivers of winning the Sprint Cup title.

Special Touring Cars Trophy – Tunjo proves unstoppable: The newly crowned Junior champion of the Special Touring Car Trophy series, Oscar Tunjo, just carries on notching up the wins. The Colombian from Team Kornely Motorsport secured two more victories in both 30-minute sprint races at the Sachsenring. In the last round at the Nürburgring (13th -14th October), Tunjo can set the seal on a successful season by wrapping up the win in the overall championship for his team.

Podium finishes in California, wins for the SLS AMG GT3: In the season finale of the Pirelli World Challenge at the Sonoma Raceway, Pablo Pérez Companc (ARG) for Champ1 Motorsports and BLACK SWAN RACING’s Timothy Pappas (USA) secured more podiums in the Mercedes-AMG GT3. The SLS AMG GT3 was also successful at the weekend, achieving wins in both the Campeonato de Espana (Circuit de Catalunya/Spain) and in the Super Car Race Series (Fuji Speedway/Japan).

Luggi, next weekend, you have your home race at Spielberg to look forward to. How different is it for you driving in front of your home crowd?

Lucas Auer: I live and breathe Austria. Of course, it doesn’t change anything as regards my preparations, but the sense of anticipation is huge. It’s just a short journey for me, and I’m really looking forward to the weekend.

How motorsport crazy are the Austrians, and which of your fellow countrymen do you look up to as a role model?

Lucas Auer: We Austrians are generally quite happy-go-lucky, and that also shows itself in motorsport. We are proud of our country, and I certainly find that I get a good push from the Austrian fans. I hope that there’ll be plenty of them there again this time and that we can put on a cool show for them. Naming a role model is difficult. There are so many to choose from in the world of motorsport – for example Niki, Gerhard, Toto… So I don’t have one role model in particular, but I have immense respect for their achievements.

Last year we sent you into the paddock wearing a disguise, and only a few fans recognised you. How do you think it will work out this year?

Lucas Auer: Some might still not recognise me, but certainly more than last year. I believe my public profile has risen in line with results. It went up a bit in the first year, then I got a big push in the second year after my first race win, and this year it has been even more noticeable. It’s been steadily increasing, which is cool.

Jules and Fabian, with consistently good results, you recently took the Silver Cup title in the Blancpain GT Series and have now repeated your success with wins in class at the Nürburgring. How would you sum up your season?

Fabian: It was a brilliant experience. We are by far the youngest driver pairing in the whole field and have as a result, relatively little experience. A few mistakes were made here and there, and we didn’t always achieve the results that we would have liked in the qualifying sessions to be able to get ahead in the overall classification. Still, we’ve got on really well together the whole season as a driver pairing, and we’ve had a lot of fun.

Jules: Our approach this season was that we can achieve anything no matter what position we start from, and we were successful in this regard. We’ll have more experience next season, which should definitely help.

What are your goals for next season?

Fabian: We’ve already shown that we have the pace to be among the front-runners. Here at the Nürburgring, we moved up from P30 to ninth place. It was very similar at Brands Hatch where we went up into fourth place. We’ll have more experience by next year – as Jules has already said. The goal in future is not just to continue to attack but also to finish on the top rung of the podium, and not only in the Silver Cup, but overall as well.

You had the Silver Cup in the bag before the final race of the season. What does this accolade mean to you?

Fabian: We’re obviously delighted. The Cup is part of the championship and is a great incentive for young drivers. But, of course, we also want to go for the overall win, let’s make that very clear.

Jules: Yes, l feel the same. Every award is special, but it’s overall wins that count. Of course, such awards also serve to motivate. For example, for my next race in Shanghai in the Blancpain GT Series Asia. At the same time, we’ll be looking ahead to the 2018 season. And when it comes to seats in cockpits, awards like the Silver Cup are certainly helpful.