Tales from the paddock – Lucas Auer: “The driver who plays hardest and has the broadest shoulders is the one who emerges the winner at the end”

Tales from the paddock – Lucas Auer: “The driver who plays hardest and has the broadest shoulders is the one who emerges the winner at the end” 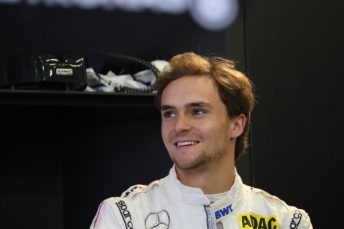 Lucas Auer has a very special affinity for the Nürburgring – next weekend, the DTM returns to the circuit in the Eifel forest

The Pole King: Lewis Hamilton has broken the record! Just one week on from drawing level with the previous record holder Michael Schumacher at Spa-Francorchamps, Lewis reigns supreme on the all-time leaderboard after taking his 69th Formula 1 pole at Monza. This was his sixth pole on the Autodromo Nazionale Monza and his eighth of the season – more than any of the other drivers. Lewis also holds the pole record for the track that runs through the Royal Park at Monza in Italy, one ahead of Formula 1 legends Juan Manuel Fangio and Ayrton Senna (five each). In addition, this tenth P1 qualifying result for the team in the 13th race of 2017 represents the 150th front row start for a Silver Arrows car.

Stat-Attack – Monza: But the sequence of extraordinary achievements was to continue beyond Saturday. On Sunday, Lewis Hamilton recorded a second victory within seven days, making him the first driver this year to win two successive races. Overall, it was the three-time world champion’s sixth win of the season and the 59th of his career. This was his fourth experience of looking out over a sea of Tifosi from the top rung of the podium at Monza. In the winners’ list for the Italian Grand Prix, Lewis has drawn level with Nelson Piquet, one short of Michael Schumacher on five. For the team, it was not only the eighth win of the season, but also their 72nd Formula 1 victory and their fourth success at Monza in a row (three times Lewis, once Nico Rosberg). Furthermore, Lewis and team-mate Valtteri Bottas recorded their third one-two result of the season.

On to the Eifel: The 2017 DTM campaign enters the final straight next weekend at the Nürburgring. Lucas Auer will certainly be pleased to be returning to the Eifel where he has booked no fewer than three fastest lap times in the last four qualifying sessions. In addition, the Austrian finished second in last year’s race. Robert Wickens also has fond memories of the Ring, having overcome difficult weather conditions in 2013 to claim a maiden DTM victory. Gary Paffett and Edoardo Mortara can also look back on race wins on this legendary track in the Eifel forest. Between them, the six Mercedes-AMG Motorsport DTM drivers have made twelve podium appearances at the Nürburgring.

Promising VLN debut for BWT Mücke Motorsport: The 40th RCM DMV Grenzland race ushered in the second half of the VLN Endurance Championship at the Nürburgring. In this sixth race of the season, Nordschleifen expert Christian Hohenadel (GER) and 2016 DTM championship runner-up Edoardo Mortara (ITA) put in a strong performance in conditions made more difficult by the changeable weather. The BWT Mücke Motorsport duo mastered the alternating wet and dry sections on the Nürburgring-Nordschleife, bringing the number 26 Mercedes-AMG GT3 home in fifth place at the end of the 28-lap race. This constituted a highly respectable VLN debut for the Berlin-based outfit. In a high-calibre field of 158 cars, BLACK FALCON put in a solid performance. Their driver trio of Adam Christodoulou (GBR), Abdulaziz Bin Turki Al Faisal (KSA), and Erik Johansson (SWE) in the number 7 Mercedes-AMG GT3 finished sixth, just 0.5 seconds behind the car in front.

A win and a P3 for CRP Racing at the Pirelli World Challenge in Texas: CRP Racing had a successful outing in the Pirelli World Challenge at Austin. On the final race weekend of the 2017 SprintX class in Texas (USA), Ryan Dalziel (GRB) and Daniel Morad (CAN) in the number 2 Mercedes-AMG GT3 celebrated a double podium for their team. But they saved up the best for the final race on Sunday. Taking their pit stop after around 25 minutes, the Anglo-Canadian duo then took the lead with fresh tyres and an open track ahead of them. Despite coming under immense pressure from the opposition, they retained the lead through to the chequered flag. Dalziel and Morad had already made a first podium appearance of the weekend on Friday with a P3 finish in a replacement race for a Canadian fixture that had to be cancelled in May. Taken together, these results were enough for Dalziel and Morad to move up one place in the SprintX drivers’ championship and finish the season in the runners-up spot, just three points behind the new champions.

Luggi, next weekend is the Nürburgring. It’s where you registered your first ever DTM pole position, and it’s a track you’ve always been fast on. What’s the secret of your success in the Eifel?

Lucas Auer: Up until now, I’ve always managed to get everything sorted in the free practice sessions and then summon up the performance at just the right time for qualifying. In the past, I’ve been able to do all of this better at the Nürburgring than on any other track. It seems as if the corners and I suit each other nicely.

How reassuring is it after some difficult races to be returning to the Nürburgring where you’ve always been strong?

Lucas Auer: The last two race weekends in Moscow and at Zandvoort were completely different. In Moscow we were slow, but we scored good points anyway. At Zandvoort we were again slow, but we didn’t score any points. It’s high time we went on the attack again. We need to get more of the Mercedes cars into the Top Six at the Nürburgring. The fact that I’ve always been one of the fastest on this circuit is encouraging.

The races at Zandvoort were brutally contested at times. Have we got to that part of the year where it’s no holds barred?
Lucas Auer: As I see it, that applies all the time in the DTM. The driver who plays hardest and has the broadest shoulders is the one who emerges the winner at the end. But by now, that’s no secret in the DTM.