Tales from the paddock – Gary Paffett: “We’ll see a different Pascal this season to the one that left at the end of 2015”

Tales from the paddock – Gary Paffett: “We’ll see a different Pascal this season to the one that left at the end of 2015” 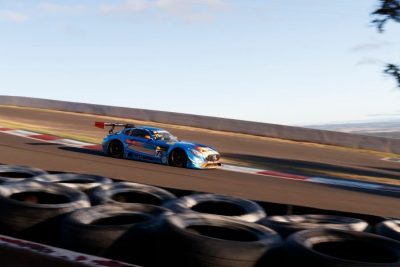 Preparations for the 2018 DTM season pick up pace with the fitness week at La Manga. Team captain Gary Paffett looks ahead to the new season.

On the ice: Valtteri Bottas proved last week that he is a Finn through and through. On Thursday, he swapped the steering wheel of his Silver Arrow for a hockey stick and went for a training session with the MK Lightning ice hockey team. The man from Nastola quickly found his footing on the ice rink in Milton Keynes. After all, he had played in a junior ice hockey team until the age of fifteen. “It was fun,” said Valtteri afterwards. “The players are the real thing, so it was really good. It was most enjoyable. I always like being on the ice.”

Successful start to the 2018 GT season: Although the new season is only three races young, the Mercedes-AMG Motorsport Customer Racing teams have already made two podium appearances in the general classification and six in their class. Three highlights of the endurance racing season – Dubai, Daytona and Bathurst – brought two class wins and one overall victory. The new Mercedes-AMG GT4 also contributed to this strong start by coming third in its class in Dubai. All the signs are that this is going to be a successful 2018.

Dubai: A bird of prey shows the rest of the field a clean pair of talons! Mercedes-AMG and BLACK FALCON are a combination which seems to have a near-monopoly on victory in the 24 Hours of Dubai: after triumphs in 2012, 2013 and 2015, the team from Meuspath again won the marathon in the desert. In the first big race of the 2018 endurance season, Abdulaziz Al Faisal (KSA), Yelmer Buurman (NED), Hubert Haupt (GER) and Gabriele Piana (ITA) driving a Mercedes-AMG GT3 saw off the strong GT3 competition to lift the A6-PRO winners’ trophy. In the A6-AM class, Lance’s David Arnold (GER), Dominik Baumann (AUT), Tim Müller (GER) and Valentin Pierburg (GER) clinched their first win of the season for Customer Racing team SPS automotive performance. The debut for the new Mercedes-AMG GT4 in 24-hour racing attracted a lot of attention and also ended on the podium, with the BLACK FALCON team TMD Friction taking third place in the GT4 class.

Daytona: Two Top Ten finishes at the World Center of Racing! The new IMSA season opened on the legendary Daytona International Speedway with a 24-hour race that not only set a new lap record but also delivered high levels of excitement right up to the finish line. The Mercedes-AMG team Riley Motorsports just missed out on the podium in the GTD class by the narrow margin of 2.7 seconds but at least scored important points towards retaining the North American Endurance Cup. In addition to the P4 for Ben Keating (USA), Jeroen Bleekemolen (NED), Luca Stolz (GER) and Adam Christodoulou (GBR), there was another Top Ten result, this time by the SunEnergy1 Racing Mercedes-AMG GT3. Maro Engel (GER), Mikael Grenier (CAN), Kenny Habul (AUS) and Thomas Jäger (GER) managed to claw their way back up to eighth place after experiencing bad luck at the start of the race.

Bathurst: Debuts and podiums Down Under. In the 12-hour race at Bathurst (Australia), the teams fielding Mercedes-AMG GT3s fared commendably in the Intercontinental GT Challenge. In an action-packed race interrupted by numerous safety car deployments, the Mercedes-AMG Team SunEnergy1 took second place in the general classification. At one point, it had looked as if Kenny Habul (AUS), Tristan Vautier (FRA), Jamie Whincup (AUS) and Raffaele Marciello (ITA) might challenge for outright victory, but the race was brought to a premature end after an accident, and they had to settle for P2. The British team, STRAKKA RACING, who were making their racing debut for Mercedes-AMG on Mount Panorama, finished on the podium in the PRO-AM class. As well as coming third in their class, David Fumanelli (ITA), Nick Leventis (GBR), Cameron Waters (AUS) and Lewis Williamson (GBR) finished seventh overall.

Gary, the new season is not far off, and you’re currently together with the entire team at Fitness Camp near La Manga. How much are you looking forward to the weeks between now and the actual start of the season?
Gary Paffett: I’m really looking forward to it. The fitness week is always a kind of kick-off event for us drivers; it’s how every season starts. We get together with the other drivers, the engineers and some other guys from the team, and we plan together for the season, have a look at what developments have been done over the winter and generally work out what our expectations are for the campaign ahead. It’s always hard work, but also a good enjoyable week. We go testing soon afterwards, so it’s pretty much the official start of the year for us.

With the arrival of Dani and Pascal, the team for the season is now complete. How do you rate our driver squad compared to those of Audi and BMW?
Gary Paffett: I think that, over recent years, Mercedes has had the bester driver line-up in the field, and I also think this year is no different. Rob (Wickens) was obviously was very successful in DTM and his departure is a loss for us. He has been very strong over recent seasons and he will be missed in the team. But we also have two strong new additions. Pascal is a former champion who has spent two years in Formula 1 and certainly has a lot of talent. He’s going to bring a lot of strength and a lot of speed to the team. Dani continued to be part of the team as test and reserve driver last year. He also played a major role in the development of the tyres that we are using at the moment. Two incredibly talented young guys coming back into the team. They didn’t race the cars last year with the cold tyres, so they have a lot to learn in that department, but they are both incredibly experienced in DTM. It’s difficult to say whether our overall line-up has been strengthened or weakened based on the drivers that have gone in and out, but I’m still convinced that we have the strongest line-up in the field.

The reactions of the fans on social media to the news of Pascal’s comeback were very strong. What’s your opinion?
Gary Paffett: I’ve known Pascal since he entered DTM all the way through until he won the championship, and I’ve kept in touch with him over the last couple of years as he was still part of the Mercedes family. He has grown a lot through being in F1. He was still very young when he won the championship in the DTM, and there was a lot of pressure on his shoulders. There were also some incidents that did not help him. But he has confessed himself that he has changed a lot over the last two years, and I think he is a more complete person and a more complete driver than he was when he won the championship. I think the people will see a different Pascal to the one that left at the end of 2015.