Tales from the paddock – Gary Paffett: “Hopefully, this will bring driver skill and ability back into focus”

Tales from the paddock – Gary Paffett: “Hopefully, this will bring driver skill and ability back into focus” 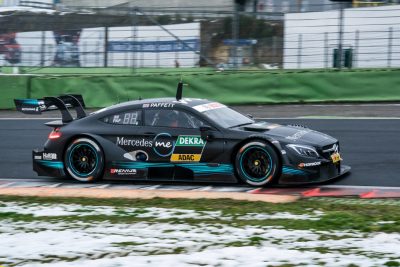 Preparations for the 2018 season gather pace. Gary Paffett talks about his initial impressions of the new car following the first DTM test of the year at Vallelunga.

Team of the Year: The reigning Formula 1 World Constructors’ Champions are now officially the ‘Team of the Year’: at the 2018 Laureus World Sports Awards ceremony last week, Mercedes-AMG Petronas Motorsport became only the third Formula 1 outfit to receive this illustrious accolade. Other nominees on the short list were the French Davis Cup tennis team, Champions League winners Real Madrid, NBA champions Golden State Warriors, Super Bowl winners the New England Patriots and the New Zealand America’s Cup team. Team Principal Toto Wolff was delighted for his team: “In terms of the success we have had over the last few years, it is down to a tremendous team effort. It is great to see all these superstars in the room, but I have the chance to work with 1,500 superstars who should all be up on stage, because this is their award.”

Test week: Chilly temperatures and snow last week caused problems during the first test sessions of the year, both for the Formula 1 teams in Barcelona and for the DTM teams at Vallelunga. Despite the complete lack of action on Wednesday, Lewis Hamilton and Valtteri Bottas driving the Mercedes-AMG F1 W09 EQ Power+ managed to put in 1,424 kilometres between them in the first week of testing – the second-highest distance covered of all ten teams. In the DTM test in Italy, it was a similar picture, with the Saturday session being almost completely washed out. Fortunately, Gary Paffett had already had a very busy Friday, putting in 119 laps – more than any of the other teams. “In this weather, we were fortunate to have got here in the first place,” said Gary with a chuckle. “So it was all the more satisfying that we were able to drive for a whole afternoon in warm and dry track conditions.”

Snowman on tour: What a week for Karl the F1 Snowman! The newest member of the Mercedes-AMG Motorsport family got a double shot of motorsport action. First he called in on the Formula 1 winter tests in Barcelona to help Mercedes-AMG Petronas Motorsport stay cool, calm and collected. “I’d heard that the DTM team had some issues with the weather… so I’ve brought my snow expertise to help out!” After a brief visit to a snowy Vallelunga for the first DTM test drives of the year, it was back to Barcelona again in the chilly hold of a plane. The second and final week of testing before the season opener in Australia was about to get underway. Follow Karl on Twitter: @KarlSnowmanF1.

Gary, you now have the first test of the year in Vallelunga behind you. What are your initial impressions of the new car?

Gary Paffett: It was obviously great to get back in the car again. It’s been a long winter, so to get back testing is very good. We were lucky with the weather on Friday. We got a whole afternoon of dry testing, and we learned a lot. With the new spec aero parts, there’s less downforce, and that’s going to bring some big changes this year. I think that has been a great decision. In recent seasons, aerodynamics has developed into a kind of arms race, including in the DTM, and the more money you spend, the faster you get. So I think the standardising of the components gives all the teams a much more level playing field, which is what everybody wants. There has been much talk about the reduced downforce, but quite honestly, it still feels like a DTM car. It may not have quite as much downforce as before, but it doesn’t feel completely different. If anything, the car moves around a bit more. So far, it’s a change for the better.

Do you think that the new cars are a step in the right direction to putting the emphasis back on driver ability?

Gary Paffett: We drivers did want a bit less downforce. The problem with having a lot of downforce is that it takes a lot away from what you are doing. It also makes it very hard to follow cars very closely, which makes it difficult to overtake. There are lots of benefits to having less downforce. For years, we have been saying you can reduce the downforce, but you need to replace it with mechanical grip, and that’s precisely what we did last year. We had softer tyres which replaced some of the downforce that we had lost. That is the direction we need to go. We need to have grippy tyres because they help to go fast in the corners while not making it hard to follow another car. I think we have got a pretty good balance this year and that the cars will be a little bit harder to drive in dry as well as in wet conditions. Hopefully, this will bring driver skill and ability back into focus rather than just the performance of the car.

There are not all that many test opportunities now before the start of the season at Hockenheim. What are the consequences of the lost day of testing last weekend at Vallelunga? And how significant was it that you went fastest on Friday?

Gary Paffett: We managed to get through a lot of our work on Friday, more than we thought we might. We collected a lot of data. I think we got a bit lucky on the Saturday. The conditions were pretty bad early on, and Lucas unfortunately made a mistake which stopped us from running for the rest of the day. But we were pretty lucky, because the track didn’t dry. The quickest lap time was 14 seconds slower than the day before. The track was very damp and very slippery, and actually very limited learning could be done in that time. From the drivers’ point of view, it would have been nice to get some more running, but from the team’s point of view, I don’t think that we lost anything. But hopefully the conditions in Hockenheim will be better, so we can get as much learning done as possible. We shouldn’t read too much into the lap times during test sessions. Last year, we were also very fast in the test at Hockenheim ahead of the first race, but then the season didn’t turn out as well as we thought it might at that point. But you can say that it’s a positive sign that we were nearly one second quicker on Friday than anybody else. We weren’t concentrating on going very quickly. We were testing and focusing on the work we needed to do. We weren’t necessarily trying to post the quickest lap times. I think we still have a lot of work to do, but topping the time sheets was a nice way to start.