Tales from the paddock – Edoardo Mortara: “After a difficult year like 2017, you have your doubts”

Tales from the paddock – Edoardo Mortara: “After a difficult year like 2017, you have your doubts” 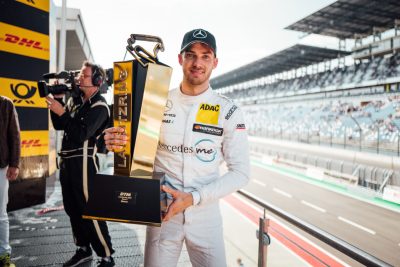 At the Lausitzring, Edoardo Mortara registered his first DTM victory as a Mercedes driver. Ahead of the race weekend in Budapest, he looks back on a problematic first year with the team.

Stat-Attack – Monaco GP: The race through the streets of Monte Carlo – perhaps the most glamorous of the season – is once again behind us. Third place for Lewis was his sixth podium finish in this regular fixture on the calendar. It was also his fifth in six races so far this season, which means he has stood on the podium more times than anyone else in 2018. He still leads the drivers’ championship, 16 points ahead of Sebastian Vettel. Lewis, Vettel and Monaco winner Daniel Ricciardo have now each claimed two Grand Prix victories after six race weekends. In the constructors’ championship, the team retains its lead. With eight podiums for Lewis and Valtteri, Mercedes-AMG Petronas Motorsport has secured more Top Three results than any other team this season.

Hungaroring, here we come: For the fifth time in the history of the series, the DTM will be hosted by the Hungaroring on the outskirts of Budapest next weekend. At Mercedes-AMG Motorsport, there are mixed feelings about this particular venue. In 1988, Johnny Cecotto made it two wins out of two for the team on its Hungarian debut. When the DTM returned to Budapest 26 years later, the Hungaroring proved a tougher nut to crack. It was only in the last season that Paul Di Resta managed to overcome the Hungaroring hoodoo and secure a first win for Mercedes since 1988. One heart-warming aspect of this win was that it came just a few days after the birth of Paul’s daughter Perla. This year, though, Mercedes-AMG Motorsport have made a strong start to the campaign. The team travels to Budapest leading both the team and constructor championships. We also have five of the squad in the Top Six of the drivers’ standings as we once again face the challenge of Hungaroring.

Fourth race – fourth podium: The Mercedes-AMG GT3 has extended its successful run in the 24H Series by securing podium number four on the fourth race weekend of the year. This time, it was IDEC Sport Racing who took second place in the 12-hour race at Imola. Paul and Patrice Lafargue together with Dimitri Enjalbert (all FRA) were in the leading group at the Autodromo Enzo e Dino Ferrari right from the start. At the time of the mandatory break after four hours, the trio were in fifth place. In the second, eight-hour section of the race, the number 17 Mercedes-AMG GT3 battled its way through to eventually cross the finish line in second place after 345 laps. Another Top Five result went to RAM Racing. The number 5 Mercedes-AMG GT3 entered by the British team started from pole position and held the lead for much of the race duration. Ultimately, though, Tom Onslow-Cole (GBR) and Remon Leonard Vos (NED) had to settle for fifth place. A respectable all-round result was underlined by the P9 finish of the number 85 PROsport Performance Mercedes-AMG GT3. Ninth place in the general classification was enough to give victory in the A6-AM class to the trio of Charles Putman, Charles Espenlaub and Joe Foster (all USA). Second place in the class went to the number 15 Mercedes-AMG GT3 entered by Swiss Team. Also runners-up in their class were the Belgian customer racing outfit of QSR Racing School who were competing in the GT4 category.

Two weeks after your first win with Mercedes, what’s the mood among you and your team after having done so well so far this year?

Edoardo Mortara: I’ve got a good feeling – much improved on last year. Things are going a lot better this season, and so we are obviously much happier as a team. It’s far more fun to be up there among the front-runners. Now I’m hoping for a decent race weekend in Budapest.

After four races, you are fourth in the overall standings. Going into the season, how concerned were you that it might turn out just like last year?

Edoardo Mortara: Of course, after a difficult year like 2017, you have your doubts. We did some great work during the winter break, and I analysed a lot of data with my engineers. In this way, we were able to find some solutions to our problems. But we have only two race weekends behind us and the season is still long, so the job is far from done.

Budapest is a track that hasn’t suited Mercedes all that well in the past. Do you think that will have changed with the new aero package?

Edoardo Mortara: We have new rules this year, and it is difficult to answer this question accurately. It’s a new situation for us, and we’ve shown at Hockenheim and at the Lausitzring that we have a good car. Our setup worked well on both tracks, and I hope it will be the same in Budapest. You can never be too sure about anything in the DTM, but I’m optimistic about the rest of the season.