Tales from the paddock – Daniel Juncadella: ‘Titanium Man’ returns to the cockpit

Tales from the paddock – Daniel Juncadella: ‘Titanium Man’ returns to the cockpit 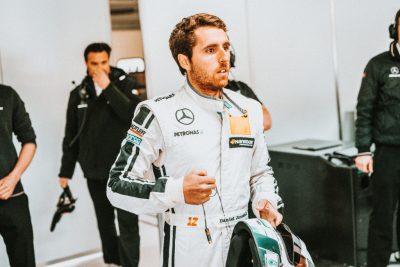 Daniel Juncadella was back in a racing car during the DTM tests at Hockenheim for the first time since fracturing his collarbone. In this week’s main interview, Titanium Man tells us what it was like.

Stat-Attack – Bahrain: Although Mercedes-AMG Petronas Motorsport narrowly missed out on their first win of the 2018 Formula 1 season in Round 2 at the Bahrain International Circuit, the team nonetheless passed some further milestones on the desert track. Lewis Hamilton and team principal Toto Wolff completed their 100th Grand Prix with the Brackley-based outfit last weekend. Lewis staged a magnificent charge through the field from ninth on the grid to finish third and make his 119th Formula 1 podium appearance (the 70th in 100 races with the team). It was also his 27th Top Ten result in a row, beating the previous record set by Kimi Räikkönen. Valtteri meanwhile finished second to claim his 23rd Grand Prix podium and 14th with the team.

China, here we come: No time to relax! Just one week after the Bahrain Grand Prix, the third round of the 2018 Formula 1 season is due to take place at the Shanghai International Circuit in China. Lewis is very much looking forward to the Chinese Grand Prix – after all, he is assured of his customary euphoric reception from the Chinese fans. But also in sporting terms, this particular track on the outskirts of Shanghai has always been a happy hunting ground for the reigning world champion. In eleven races there, he has scored five victories, six pole positions, six fastest race laps and eight podium finishes. Since 2014, the winner has consistently been a Silver Arrows driver: three times Lewis and once Nico Rosberg. That first Grand Prix victory for the German ex champion in Shanghai in 2012 was also the first for Mercedes since it was reconstituted as a works team. Incidentally, the sixth anniversary of that win falls on the same date this year – 15th April.

New season, new paint jobs: To coincide with the DTM tests at Hockenheim this week (9th – 12th April), the last before the start of the season, the Mercedes-AMG Motorsport DTM Team unveiled the new designs of the six Mercedes-AMG C 63 DTM cars in which the driver sextet will be competing during the imminent 2018 DTM season.

Successful weekend for the Mercedes-AMG GT3: In the second VLN race of the season last weekend, the Mercedes-AMG GT3 had its first podium finish. Adam Christodoulou (GBR), Manuel Metzger, Dirk Müller and Maro Engel (all GER) of Mercedes-AMG Team BLACK FALCON were runners-up in the general classification on the Nürburgring Nordschleife. No fewer than four Mercedes-AMG GT3 cars came home in the Top Ten, thus making it a successful dress rehearsal for the 24-hour race on the weekend of 10th – 13th May.

At the Circuit Zolder in Belgium, there was another second place for the Mercedes-AMG GT3. In the opening round of the Blancpain GT Series Sprint Cup, Michael Meadows (GBR) and Raffaele Marciello (ITA) of AKKA ASP made their podium appearance in the second race. Felix Serralles (PUR) and Nicolas Jamin (FRA) in the sister car were only two seconds short of joining them and had to settle for fourth place.

Mercedes-AMG monopolised one of the podium ceremonies in the 3 Ore Endurance Champions Cup at Mugello in Italy. Stefano Pezzucchi, Marco Zanuttini and Mario Cordoni (all ITA) driving a Krypton Motorsport Mercedes-AMG GT3 finished second in the general classification and first in their class. Customer racing team MDC Sports came second with a Mercedes-AMG GT3 and third with an SLS AMG GT3, making it a class podium lock-out for Mercedes.

Mercedes-AMG GT4 as class winner: Following its maiden victory in the first VLN race of 2018, the new Customer Racing car has had further success on the Nürburgring Nordschleife. In the second race of the season, the Mercedes-AMG GT4 driven by Stefan Karg, Fidel Leib and Moritz Oberheim (all GER) finished second in the SP10 class. Another car based on the Mercedes-AMG GT4 and crewed by Patrick Simon, Christian Gebhardt, Bernd Schneider (all GER) and Jethro Bovingdon (GBR) won the SP8T class.

Meanwhile, the 2018 GT4 European Series and Belcar Endurance Championship were getting underway at Zolder. In the 60-minute sprint races of the GT4 European Series, the Selleslagh Racing Team registered the best result with a class victory. In the 125 minute race of the Belcar Endurance Championship, the QSR Racing School duo of Jimmy de Breuker and Yannick Hoogaers (both BEL) won their class.

Daniel, you drove a DTM car on Tuesday for the first time since your injury. How did it feel?

Daniel Juncadella: It was a very special situation for me. I knew I could move my arm before then, but Monday was the first time I had sat in the car and got strapped in. That was when I realised just how tight it is in the cockpit. After that, I wasn’t sure if I would be able to drive on Tuesday. But after the first run, I concluded that we only needed a few adjustments to the steering wheel and seat. On the second run, I was already feeling OK. When I got out of the car, I saw that I was in second place at that time, only three tenths behind Gary. That came as a big surprise for me, because although I felt good in the car, I expected the injury to put me well down on the timesheets. After all, I have to make more use of my right arm on the right-hand turns, and here in Hockenheim, there are quite a few of those.

In the team, you’ve already acquired the affectionate nickname ‘Titanium Man’. How do you react to that?

Daniel Juncadella: Well of course, I now have quite a sizeable chunk of titanium inside me. Maybe I will post some pictures in the next few days day to prove it. But seriously, it was a very special day for me. It was a feeling similar to some of the biggest successes in my career. At the beginning of the afternoon, it was a bit harder for me, but all in all, everything went really well and I was able to complete 121 laps.

How did the car feel?

Daniel Juncadella: It was good. The team had made a few changes from the first day of testing on Monday, so the setup was very neat right from the start. We tried some things in the morning that had a beneficial effect. In the afternoon, we concentrated on racing simulations. It was the first race simulation for me with the new tyre compound that I tested two years ago. That also went very well, and I think I was competitive. Overall, it was a perfect day for me. I couldn’t have wished for a better one.