Tales from the paddock – Daniel Juncadella: “I’m convinced that I’ll be fit enough to start the season in early May”

Tales from the paddock – Daniel Juncadella: “I’m convinced that I’ll be fit enough to start the season in early May” 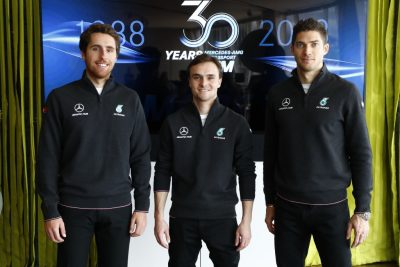 Daniel Juncadella has had an eventful few days: while putting the finishing touches to his physical fitness for the start of the season, he came off his bike and had to have an emergency operation. He tells us what happened and whether he expects to be fit for the tests at Hockenheim.

On to Bahrain: The second race weekend of the 2018 Formula 1 season takes the drivers and teams to the 5.412 km Bahrain International Circuit. Mercedes-AMG Petronas Motorsport drivers have won three of the last four races on the Sakhir track: Lewis Hamilton twice (2014, 2015) and Nico Rosberg once (2016). The team’s record in qualifying is even better – since 2013, a Silver Arrows car has always been in pole position. Two of the best times in qualifying were set by Nico (2013, 2014), two by Lewis (2015, 2016) and one by Valtteri Bottas (2017). In fact, that was the Finn’s maiden pole in a Grand Prix. His time of 1:28.69 minutes was the fastest ever in Q3 at the Bahrain International Circuit.

F1 debriefing: Whilst it is always important to look ahead in F1, it is equally important to review the events of a race weekend and learn lessons from it. But what does this involve in practical terms? We take a look behind the scenes and reveal the methods the team employs to scrutinise a Grand Prix in detail and make the necessary adjustments for the future, to rectify mistakes and to improve performance all round. Read the feature here

DTM test: While the Formula 1 season has already begun, the DTM enters the closing phase of preparation next week. Between 9th and 12th April, all three manufacturers contesting the DTM will attend the final test ahead of the season opener at the Hockenheimring (4th – 6th May). On all four days from Monday to Thursday, testing will take place between 09:00 and 12:00 and between 14:00 and 18:00. As in previous years, fans are welcome to watch from the south grandstand which affords a good view of the track as the teams apply the finishing touch.

Maiden victory in general classification for Mercedes-AMG GT4: Easter Monday 2018 will go down in the history of Mercedes-AMG Motorsport as the day on which the Mercedes-AMG GT4 claimed its first race win in the general classification. Jean-Luc Beaubelique and Jim Pla (both FRA) driving a car entered by AKKA ASP won the second race in the French GT4 Cup at the Circuit Paul Armagnac. Pla started from second and took the lead after 15 minutes. The late pit stop in the 60-minute race proved to be decisive. Pla gradually extended his lead before handing over to team-mate Beaubelique. Both Frenchmen put in a magnificent performance to secure a comfortable maiden victory. The duo had already shown potential on the day before by taking second place in Race 1. The number 88 sister car driven by Benjamin Ricci and Thomas Drouet (both FRA) finished seventh on Monday, a result that was bettered by another of the Mercedes-AMG GT4 contingent: Yann Ehrlacher and Laurent Millara (both FRA) of Team M Racing – YMR made it three in the Top Ten with sixth place.

Two class victories and a charge through the field to P3: It has been a bumper Easter weekend for the Mercedes-AMG GT3. Rudolf Máchanek (SVK) was the man behind both class victories in the two 30-minute sprint races contested as part of the Slovak Circuit Cup. Third place in the season opener of the British GT Championship went to Lee Mowle (GBR) and Yelmer Buurman (NED). The duo made a magnificent charge through the field from ninth on the grid to take the third podium spot. It was a gratifying debut for ERC Sport who are competing for the first time as a Mercedes-AMG Motorsport outfit. Race 2 fell victim to the adverse weather conditions.

Dani, you went training on a mountain bike last weekend. Tell us what happened.

Daniel Juncadella: I was with eight others training and mountain biking in Ibiza. Everything was going fine until Saturday afternoon when I had a small accident and fractured my collarbone. I wasn’t going fast at the time, but I took a tumble to the left. It seemed like only a minor mishap, so I just rode on. But when I got back from the outing, I realised that my collarbone wasn’t in the right place. That came as a shock for me, because it’s something I’ve never experienced before. It was strange because, up to then, I hadn’t felt any pain. Well obviously, we drove straight to the hospital and I flew to Barcelona to see a specialist as soon as possible. There, I was operated on by the MotoGP surgeon, Dr Mir, and 24 hours later I was back home. Of course, this is not the ideal start to the season, but luckily it was attended to very quickly and there were no complications.

What happens next now?

Daniel Juncadella: Yesterday afternoon, I started rehab together with my physiotherapist. First, we did some gentle exercises with the left arm and also some magnetic therapy. When I had the accident, my only thought was: “Oh man, maybe the season is already over for me.” But luckily, it wasn’t that bad, and 48 hours later, I was doing as well as can be expected in the circumstances.

Do you expect to be fit enough for the ITR test at Hockenheim next week?

Daniel Juncadella: Yes, I’m sure of that. I’ll take it easy to begin with, and I’ll also have my doctor there. The decisive factor will be how I feel in the car. This also includes checking to see if, for example, the seat belts are pressing too hard on my collarbone or on the scar. But I’m optimistic that we can cope. In the week after the test, the stitches will be removed, and I’m convinced that I’ll then get fit enough to start the season in early May.