Tales from the paddock – Bernd Mayländer: “Every safety car deployment is different, but that’s what I like about it”

Tales from the paddock – Bernd Mayländer: “Every safety car deployment is different, but that’s what I like about it” 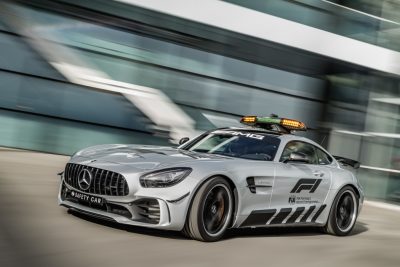 Bernd Mayländer has been driving the safety car in Formula 1 since 2000 and has led the field for over 700 safety car laps. In an interview, he tells us about the greatest challenges posed by his job.

Stat-Attack – Canada: Last weekend, Canada hosted Formula 1 for the 49th time. Although the race weekend at the Circuit Gilles Villeneuve did not have the happiest of outcomes for the team, there were still a few milestones along the way. First and foremost, Valtteri Bottas not only made his 26th podium appearance in Formula 1 as runner-up but also registered his fourth Top Three result in the Canadian Grand Prix (two P3s and two P2s). He has now made it onto the Montreal podium for the past four consecutive years. It was also his fourth podium finish of the current campaign, each time as race runner-up. Valtteri still has a first victory of the season firmly in his sights. The team has recorded nine Top Three finishes in 2018, more than any other team on the grid. It was also the 20th podium for a car powered by a Mercedes engine in the Canadian Grand Prix. Although Lewis had to content himself with a relatively modest P5, it was at least his 32nd points-scoring finish in succession.

Third place in rain-affected race: Following the victory for MANN-FILTER Team HTP Motorsport in the ADAC GT Masters at Most (CZE), the squad again made it onto the podium at the Red Bull Ring (AUT) as Maximilian Götz and Markus Pommer (both GER) took the number 47 Mercedes-AMG GT3 to third place on Sunday. The chaotic 60-minute race started under dry track conditions. But after only five minutes, it began to rain, and the race developed into a tyre lottery. Maximilian Götz was undaunted by the inclement conditions. The Mercedes-AMG driver stayed out on slicks and advanced from fifth place on the grid to second. Just like his partner, Pommer put in a great performance on the normally high-speed circuit. He overtook one opponent but had to yield to another on slicks shortly before the end. After 37 laps, Pommer crossed the finish line in third place and a good seven seconds behind the winners on the day. Sebastian Asch and Luca Stolz (both GER, Team Zakspeed BKK Mobil Oil Racing) made a spirited charge from 18th on the grid to cross the line in fifth. Indy Dontje (NED) and Maximilian Buhk (GER) in the number 48 MANN-Filter Team HTP Motorsport also made it into the points.

Victory for the SLS AMG GT3: Three races took place at the Nürburgring in the context of the DMV GTC. Uwe Alzen and Dietmar Haggenmüller (both GER) steered the number 55 Mercedes-AMG GT3 entered by Spirit Racing to second place in Friday’s 60-minute race. The number 5 Mercedes-AMG GT3 fielded by équipe vitesse and driven by Josef Klüber (GER) crashed in this opening race of the event. Consequently, Kenneth Heyer (GER) drove the team’s replacement car in the two sprint races on Saturday. The reigning Mercedes-AMG Customer Racing Champion showed his customary speed in the number 50 SLS AMG GT3 to progress from last on the grid to fourth at the chequered flag. He started the second race from P2 and claimed his second victory of the season in the series at the end of the 30-minute duration.

International victories and podium successes for the Mercedes-AMG GT3: In the International GT Open at the Circuit Spa-Francorchamps, the Mercedes-AMG customer sports teams put in some impressive performances in both races. SPS automotive-performance were victorious on Saturday in the Pro-AM class and finished third on Sunday. In the Sunday race, Drivex School made it a double podium for Mercedes-AMG Motorsport in the Pro-AM class. In the AM classification, Sports & You took third place on Saturday and fourth on Sunday. T.K.R. Racing got their season off to a perfect start in the China Endurance Championship. They started the four-hour race from pole position and drove a lights-to-flag victory. Rudolf Máchanek (SVK) of customer sports team Auto Centrum Bratislava made two podium appearances in the Slovak Circuit Cup. He took third place in the first race at the Pannonia Ring and won the second.

What is the biggest challenge for the safety car driver?
Bernd Mayländer: I need to know where there has been an accident, where in the field I join the track, where the other cars are and if there are any cars that need to overtake me. I also need to know where they can best overtake me without creating a risk for the other cars or for the marshals. I’m also in constant contact with race control. Every safety car deployment is different – but that’s what I like about it.

You were given a new car this season, a Mercedes-AMG GT R. How did you go about familiarising yourself with it?
Bernd Mayländer: Over the winter, I had five days in the new car on a high-speed test track in Nardo, Italy. It didn’t take me too long to familiarise myself with it, as I’ve driven a GT S before. The new car is overall faster though; it’s about one second quicker per kilometre on the race track. The car is equipped with a specific communications and GPS mapping system and with highly visible safety lights, but most of the car – the engine, the gearbox, the suspension – is all standard.

One of the most memorable races in terms of safety cars was the 2011 Canadian Grand Prix? What are your memories of it?
Bernd Mayländer: It was a crazy race. I led the race for 46.9 percent of the distance. It turned out to be the longest Grand Prix in Formula 1 history because the weather conditions were so bad that they had to suspend the race for quite a while. In fact, the conditions were so bad that I even had the time to grab a coffee and a bite during the red flag. I had my snack in the race control room; that way I could make sure that I wouldn’t miss any important information.