Tales from the paddock – Paul Di Resta: “I’m the one that’s hunting down at the moment”

Tales from the paddock – Paul Di Resta: “I’m the one that’s hunting down at the moment” 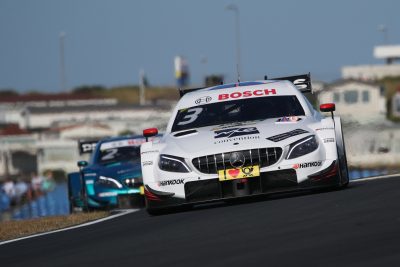 This weekend the DTM returns to Brands Hatch. Paul Di Resta talks about the situation in the championship ahead of his home race, which also marks the start of the second half of the season.

Brands Hatch, here we come: The drivers and teams face a special challenge at the start of the second half of the season. Next weekend, the DTM will be contested for the first time on the 3.908km Grand Prix circuit at Brands Hatch. In the eight years from 2006 to 2013, the DTM was staged on the shorter ‘Indy’ variant of the historic British track. Mercedes-AMG Motorsport DTM drivers won four races during that period. The first of these victories came in the 2007 campaign, with Bernd Schneider lifting the trophy. This was followed by home wins for local favourites Paul Di Resta (2009, 2010) and Gary Paffett (2012).

First, second and third places at the Nürburgring: Mercedes-AMG celebrated a successful end of half-term in the 2018 ADAC GT Masters at the Nürburgring. Maximilian Buhk (GER) and Indy Dontje (NED) in the number 48 Mercedes-AMG GT3 were victorious in the Saturday race to claim a second win of the season for MANN-FILTER Team HTP Motorsport in the Super Sports Car League. And when the second-placed Audi was subsequently handed a time penalty, Maximilian Götz and Markus Pommer (both GER) in the number 47 MANN-FILTER Team HTP Motorsport were promoted to the Top Three. Sebastian Asch and Luca Stolz (both GER, Team Zakspeed BKK Mobil Oil Racing) driving yet another Mercedes-AMG GT3 completed an excellent all-round result on Saturday by finishing fourth, just outside the podium group. On Sunday, Maximilian Götz and Markus Pommer were able to celebrate their second podium finish of the weekend when Pommer secured second place one lap before the end with a spectacular overtaking manoeuvre on the home straight. Götz and Pommer have now moved up to second in the 2018 ADAC GT Masters drivers’ championship.

Overall victory in Australia, second place in Japan: In the Australian GT Championship at Sydney Motorsport Park, Peter Hackett (AUS) of the Customer Sports team Eggleston Motorsport made a podium appearance in all three sprint races. The Australian secured a victory and two P2 finishes in the number 63 Mercedes-AMG GT3. With a 205-point haul from the weekend, the defending Endurance champion has now moved up into second position in the overall standings and is just 16 points behind the current leader. With only one race weekend to go, Hackett has a very realistic chance of retaining his Australian GT Championship title.

2 x P3 for the Mercedes-AMG GT4: After the historic maiden victory for the Mercedes-AMG GT4 in the seventh round of the IMSA Continental Tire SportsCar Challenge, Owen Trinkler and Hugh Plumb (both USA) underscored their strong performance with another podium finish in the number 46 car. At the Road America racetrack, the TeamTGM driver duo finished the eighth two-hour race of the season in third place. After their second podium finish in a row, the two have moved up to take the lead in the GS class. For the Mercedes-AMG GT4, it was the fourth Top Three result in the three most recent IMSA Continental Tire SportsCar Challenge fixtures.

Mercedes-AMG GT4 drivers also made podium appearances in the British GT Championship. In the two-hour race at Brands Hatch, Nick Jones and Scott Malvern (both GBR) crossed the finish line in third place. With one race weekend still to go in the 2018 season, Jones and Malvern maintain their lead in the GT4 Pro AM drivers’ standings.

The DTM is coming back to Brands Hatch. You’ve won there twice in the past. In fact, your home win in 2010 marked a turning point in the season. Do you think we might see something similar this weekend?
Paul Di Resta: It could indeed be the same sort of situation this weekend. It certainly was a turning point in 2010. The start of the second half of the year is definitely the most crucial part. At the moment, I’m focused on trying to repeat my wins from 2009 and 2010 which was the last time I raced at Brands Hatch.

What is it about the Grand Prix circuit at Brands Hatch that makes it such a special challenge?
Paul Di Resta: It’s a track variant I have never driven before. The big thing for me is the elevation change and how fast Brands Hatch can be. Very much like Zandvoort but a little bit quicker. And obviously it’s one of the tracks that I grew up on when I was contesting junior series. I used to race there all the time. I can even remember going there as a kid when my father was driving, and I obviously remember the successes I had there which have got me where I am now as a professional driver. It was a big part of my life.

The second half of the season is about to get underway at Brands Hatch. Is it still too early for you to be thinking about your chances of winning the title?
Paul Di Resta: Absolutely. The main focus is the championship, and it always is in any year. But I think, given the position we are in, we need to keep one eye on it. At the moment, it is a little bit too early to be dwelling on the idea. But the Brands Hatch weekend could certainly be a key turning point, and we really could start to focus on it. As for me, I’m the one that’s hunting down at the moment. With a little bit more luck on my side, I think with the performance we’ve got, hopefully we can make the best of that.