Tales from the paddock – #HiFive

Tales from the paddock – #HiFive 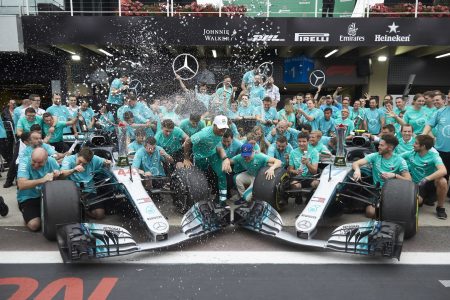 Stat-Attack – Brazil GP: It was another successful weekend for Mercedes-AMG Petronas Motorsport in Brazil. Two weeks after winning the FIA Formula One Driver’s World Championship with Lewis Hamilton in Mexico, the team has now clinched the constructors’ title for the fifth year in succession. Lewis registered his 72nd Formula One victory, his second at Interlagos and his tenth of the 2018 campaign. At the same time, it was the five-time World Champion’s 50th win of the Formula One hybrid era, meaning that Lewis has triumphed in just over half of all 99 races since 2014. On Saturday, he had already booked his 82nd pole position in the premier class, his tenth of the season and his third on the Autodromo Jose Carlos Pace. Furthermore, it was pole position number 100 for the team in Formula One and the tenth for a Mercedes-powered car in the Brazilian Grand Prix.

Championship and race win in Japan: The 2018 Super GT Series 2018 ended in triumph for K2 R&D Leon Racing. In the final race of the season, held at Twin Ring Motegi, the number 65 Mercedes-AMG GT3 entered by the customer racing outfit recorded its first win of the season. After four P4 finishes Naoya Gamou and Haruki Kurosawa (both Japan) not only made their first podium appearance of the campaign but also secured the championship title in the GT300 class. The newly crowned champions were joined on the podium by the second of the two customer racing teams: Tatsuya Kataoka and Nobuteru Taniguchi (both JPN) finished third in the number 00 Mercedes-AMG GT3 entered by GOODSMILE RACING.

Drivers’ and team championships in Italy: The Mercedes-AMG GT3 had further success this weekend in Italy. In the final fixture of the 3 Ore Endurance Champions Cup, Krypton Motorsport claimed the drivers’ and the team titles. At the end of the six-hour race in Rome, the number 2 car driven by Stefano Pezzucchi and Marco Zanuttini (both ITA) finished second after starting from third place. Victory at the Autodromo Vallelunga went to another Mercedes-AMG GT3: Adrian, Manuel and Philipp Zumstein (all SUI) of MDC-Sport advanced from fifth on the grid to cross the finish line after 216 laps as race winners.

Victory for Mercedes-AMG GT4 in Spain: SPV Racing were Sunday’s winners in the Campeonato de Espana Resistencia. the Swedish pairing of Christer Lindholm and Gregor Dobrowolski in the number 129 Mercedes-AMG GT4 started the two-hour race at the Circuit de Catalunya from tenth place and won by the slender margin of three tenths of a second.