Talbot wins the Australian GT round in Perth!

Talbot wins the Australian GT round in Perth! 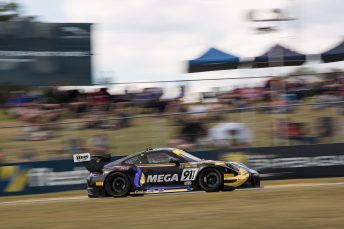 MEGA Racing Porsche driver, Liam Talbot has extended his lead in the CAMS Australian GT Championship following today’s second race at Barbagallo Raceway in Perth, where he secured the round victory.

Talbot’s achievement represents the first Australian GT Championship round win for the FIA GT3 specification Porsche 911 GT3-R, the first for Walkinshaw GT3 and for Talbot as an individual driver.

After yesterday’s race win, Talbot would start on pole position for today’s second and final one hour race. A by-product of that was an extended compulsory pitstop time.

An early Safety Car wasn’t what the team needed, however that is exactly what transpired. Off the restart, Talbot was able to maximise the time available to him and extend the race lead whilst the squabbling went on behind.

When the pitstop window started, the Bathurst 12 Hour class winner encountered some of the traffic that had served their compulsory time.

A tyre change sent Talbot out with fresher rubber to try and maximise his opportunities on the clockwise Barbagallo Raceway layout.

He pushed on throughout the remainder of the race in an attempt to minimise the points harm and finish as high up the order as possible.

At the drop of the chequered flag he was in a fighting sixth position and (unofficially) leads the Championship by 28 points.

The next race for Talbot will be the goldRush Rally 9INE in America, before returning home for the opening round of the Australian Endurance Championship at Phillip Island over May 26-28.

The Western Swing was a positive one for Liam and the entire team and the next race cannot come soon enough!

“We knew today was going to be tough with the big long stop that came as a result of the win yesterday. We didn’t need an early safety car and just had to truck on before stopping.

“Unfortunately, the early safety car came! The Walkinshaw GT3 guys had worked so hard on the setup throughout the weekend that I was feeling pretty comfortable.

“Once the Safety Car went in – the car came on and got stronger – it was MEGA! I just took off at the front and looked in the rear view to wonder where everyone else went!

“It is fantastic to win the round, you hope each time out that you can walk away with a good result. The testing we did here was invaluable. It really helped to get acclimatised to this surface with its high tyre wear and how that would interact with the Pirelli tyres.

“From here, we’ll go away, work out what went right and where we can improve. You never want to rest in this game.

“I’m just thrilled to have the support of a company like MEGA Limited, our friends at Wash-It Australia, Morris Finance and Urban Maintenance Systems.

“The professionalism of the Walkinshaw GT3 guys and their calls have been on the money all weekend long as they have been all season, I’m definitely leaving tonight feeling very content!”