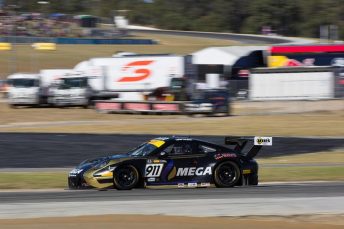 Liam Talbot gets back into more comfortable racing confines this weekend for the opening round of the Australian Endurance Championship at Phillip Island, where he will have John Martin join him in the MEGA Racing Porsche 911 GT3-R.

While he leads the Australian GT Championship having scored two wins this season, Talbot’s preferred climate is endurance racing.

Being joined by Martin provides a strong combination given their endurance racing background and familiarity with the Porsche 911 GT3-R.

The Walkinshaw GT3-prepared package has form in the Endurance Championship, last year scoring pole position at Sydney Motorsport Park and runner up placings at SMP and Hampton Downs with Martin and Duvashen Padayachee at the wheel.

Talbot is the reigning Blancpain Endurance Series Champion and joined with Martin and Padayachee to win the GT3-AM class at February’s Bathurst 12 Hour. Martin himself holds an LMP2 pole position at the Le Mans 24 Hour with the Alan Docking Racing team on his resume.

Martin – based in North Queensland – conducted a successful test session in the Porsche supported by Australia’s newest Petroleum company – MEGA Limited – at Phillip Island last week and has declared himself ready for the fight this weekend.

Meantime, Talbot has been in the US as part of goldRush Rally 9INE tripping with a fleet of supercars from Beverly Hills to Las Vegas with sponsor and good mate – Ben Hennock from WashIt Australia Mobile Truck Wash.

Phillip Island is a track well suited to the FIA-GT3 specification machinery in the Australian Endurance Championship and with more high profile teams and manufacturers joining the Championship, it sets up for a huge battle over its four rounds.

The event will be conducted as part of the 100th Shannons Nationals event at Phillip Island. Two qualifying sessions will set the grid for Sunday’s 500 kilometre race – which will be the average of both drivers’ times set in the two sessions. The 112-lap race that starts at 12:40pm on Sunday features a minimum of two compulsory timed pitstops.

Livestream coverage of Sunday’s race will be hosted on www.thenationals.com.au.

“The Australian Endurance Championship is something we’ve been working towards as a central part of the MEGA Racing program,” explained Talbot.

“We’ve got John Martin on board and that it forms a great combination. I am very comfortable in the Porsche 911 GT3-R and John has a lot of experience in the car from last year and the two podium results he achieved with Duvashen.

“Endurance racing is the domain of both of us – whether in GT-spec or in John’s case at Le Mans and the World Endurance Championship.

“The success that Walkinshaw GT3 has led MEGA Racing to in the Australian GT Championship thus far will carry across to this longer form of racing.

“They have seven major 500km race victories in the Supercars Championship and the guys working on the MEGA Racing Porsche – led by Mat Nilsson – have been involved in many of those successes.

“The strategy they have formulated throughout the year so far has been spot on and this weekend, I have full trust in them to do the same and encounter some of the challenges that Phillip Island inevitably throws up – from changeable weather, to Cape Baron Geese and a full field of racers all chasing that opening round win!”