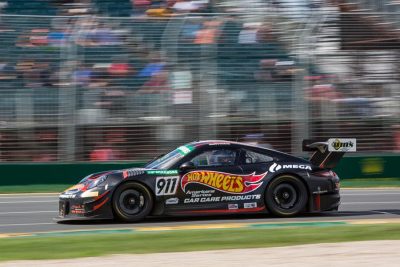 Liam Talbot and John Martin head south this weekend for the historic first event at The Bend Motorsport Park in Tailem Bend, SA where they will once again be sporting the colours of Hot Wheels™ Car Care Products.

Adding to the intrigue is it will be the first racing event on the 7.77km The Bend GT circuit – with over 30 corners it is the second longest permanent circuit in the world outside the Nurburgring Nordschleife.

With it being the first motorsport racing event held on the circuit, it is anticipated that drivers will be greeted with an abrasive surface, which Talbot believes will benefit the Walkinshaw GT3-prepared Hot Wheels™ Car Care Products Porsche.

The unique format will see a 500km race broken into two parts – Saturday’s Part 1 will consist of 24 Laps before an effective ‘competition caution’ and then Sunday’s Part 2 a continuation of 44 Laps. No advantage – aside from racing position – from Saturday’s race can be carried through to Sunday’s Part 2.

Qualifying adopts the Australian Endurance Championship format which averages both drivers’ times in their respective sessions.

Attacking a brand new circuit is not new for either Talbot or Martin.

Talbot has extensive experience around the Nurburgring Nordschleife in the annual 24 Hour race having competed a number of times for the Aston Martin factory team, along with winning the European Blancpain Endurance Series in 2016.

Martin has shown versatility having driven a multitude of vehicles around the world from open-wheelers in A1GP and the mighty V12 Super League Formula cars to sitting on pole at Le Mans in an LMP2 car.

Nevertheless, Talbot believes the new circuit will be a leveller, with very few of the Australian GT or Endurance Championship regulars having the chance to experience each one of the 30-odd corners around the 7.77km layout.

Both head to Tailem Bend confident of a good showing after coming to grips with the evolutionary aerodynamic and air restrictor package applied to the Walkinshaw GT3 prepared car ahead of the season.

The debut of the striking black Hot Wheels™ Car Care Products Porsche turned heads wherever it went at the Formula 1 Rolex Australian Grand Prix in Melbourne and the epic machine is set to do it once again at what promises to be an exciting racing debut for Australia’s newest racing circuit.

Full Livestream of Sunday’s action from The Bend can be viewed at the Shannons Nationals website – www.thenationals.com.au.

For more information on how you can Clean, Enhance and Protect with Hot Wheels™ Car Care Products Epic Shine™ head to www.hotwheelscarcare.com.au or www.facebook.com/hotwheelscarcare.

“This weekend’s race will be one that is largely heading into the unknown,” said Talbot. “We haven’t had the chance to study any onboard of the full circuit or complete a full simulation lap of The Bend.

“I’ve looked at the simulation of the Supercars circuit – which covers off about 11 corners, but that leaves only around another 20 to learn!

“The format is an interesting one and between John and I we’ll really need to be on our game Saturday. If you lost time on Saturday, that will really compromise what you can achieve Sunday when the points are handed out.

“The circuit will be green, therefore pretty abrasive as it is so new. Generally, the Pirelli rubber and the Hot Wheels™ Car Care Products Porsche get on well and with Mathew Nilsson and the Walkinshaw GT3 team calling the shots, our strategy is always on point, so that works in our favour.

“There were some great learnings about the evolution package we’ve got on car at the Grand Prix and with this being a European-spec circuit as well, we think we can continue that move forward with the Hot Wheels™ Car Care colours. It is certainly plays into the experience that both John and I have.

“We hope that come Sunday we’ve got a good bag of points towards both Championships and can move onto the next round in a really great position.”